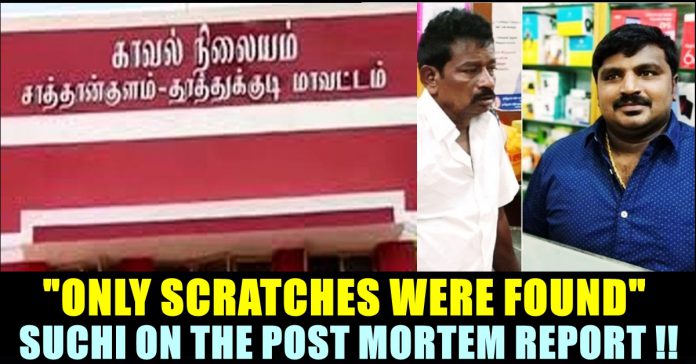 The series of tweets which was posted around 6 : 30 PM on Thursday, was deleted immediately by her due to unknown reasons. The viral video of Suchi explaining about the incident in English language to make it get nationwide attention was also deleted by her. In her next tweet, it was written “Turns out all of us lied-me, the family, the dozens of eyewitnesses, Dr.Vennila, Revathy, the doctor at the sub jail. Reports also says anal/genital region was untouched- source, a telephone conversation with a CB-CID who demanded by law that I delete my video”

“I ain’t no law breaker bro, I’ll delete the video, it’s job is done anyway, But the word “keeralgal” (Scratches) is going to give me sleepless nights. It’s a dark day” her next tweet reply to a follower read.

As soon as these tweets from Suchi surfaced, followers of her started asking her to upload the pictures of the post mortem report. Replying to them, Suchi wrote “Requested the post mortem but it is a completely confidential document that will go straight to the judge – not even the family. Be ready for some very quick surprises. Whoever chose anything at all over humanity, even your duty-this is on your head” her reply read.

After deleting the above tweets, Suchi came up with a single tweet, hinting about the post mortem report, writing “‘Keeralgal’ (‘scratches’) – this word is going to give me sleepless nights #justiceforjayarajandfenix”

Though these tweets were deleted by the singer, screenshots of them are being widely shared in the social media platforms. Days after the report on the custodial death of the father and son duo surfaced, known faces and influential personalities across the country who are having huge number of followers for their official social media accounts, started raising their voice. They requested public to join hands together to seek justice for the injustice took place. The main reason behind the wide attention is a video made by singer Suchithra who narrated the whole incident in English language, to make everyone in the country aware of the issue.

If this is what the post mortem report has to do in this case, it makes everyone’s statement including Fenix’s friends, family, most importantly Head constable Revathi false. When the other police officers at the station refused to cooperate with Magistrates, Head constable Revathy who was present on the night of June 19 came front as the only Police official to sign her witness statement that too after the magistrates assured her protection.

It is widely believed that the Police officers of Sathankulam tortured them with lathis and beaten them black and blue after stripping their clothes off under Inspector Sridhar’s supervision. Fenix’s elder sister Perisis, after seeing the bodies on the night June 24, has said “Munnadiyum Pinnadiyum onnume illa” (There was nothing left on the front and rear of the bodies) to the reporters in Tuticorin.

Previous article“Jagame Thanthiram” To Be Released In OTT ??
Next articleTamil Filmmaker Turned Shopkeeper Amidst COVID 19 Pandemic !!