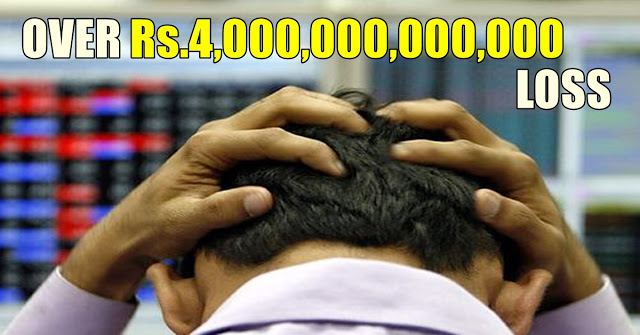 Playing havoc, UK’s vote to exit European Union knocked off nearly Rs 4 lakh crore from the investors’ wealth in Indian stock markets within minutes they opened for trading this morning.
The total investor wealth, measured in terms of cumulative value of all listed stocks including that of promoters, fell below Rs 98 lakh crore level early morning as reports from the UK showed Britain voting against remaining with the EU block.This marked a plunge of nearly Rs 4 lakh crore from Rs 101.4 lakh crore at the end of yesterday’s trade.The benchmark Sensex could recoup only a small portion of its early morning loss of nearly 1,058 points despite the government seeking to allay concerns, RBI intervening in forex market with liquidity infusion and some buying by domestic institutions at lower levels.
Sensex was still trading over 950 points down at just above 26,000-mark.

All the 30 Sensex stocks were trading in the red with some blue-chips like Tata Motors and Tata Steel plunging by over 10 per cent given their significant exposure to the UK.
Concerns further mounted as commentators said Britain’s exit, commonly referred to as Brexit, would mean that the EU could slip into recession while Indian companies would also need to rework their strategy to use UK as a gateway for their European operations.

Besides, there are fears that the UK operations of several Indian companies might take a hit due to immigration and other restrictions that might come in because of Brexit.