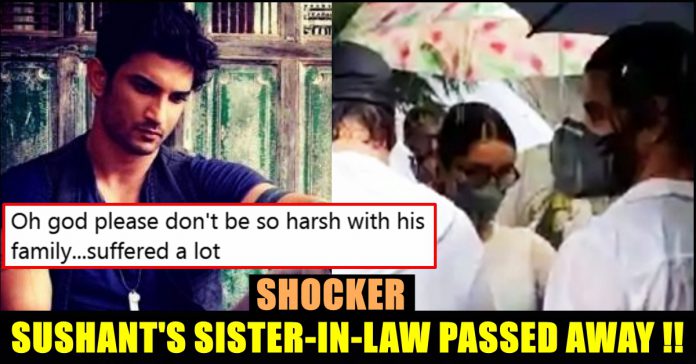 As the entire couldn’t come out of the shock caused by Sushant Singh rajput’s demise, a report on his sister-in-law’s death left people devastated. Sudha Devi who couldn’t able to come to terms with Sushant Singh Rajput’s sudden demise, has passed away at her native Purina in Bihar, according to reports.

Sudha Devi is Sushant Singh Rajput’s cousin brother’s wife and she couldn’t bear the loss of Sushant Singh rajput, it seems. She reportedly stopped eating since the news on Sushant’s death had surfaced despite of the insistence of her relatives. She breathed her last when Sushant’s funeral was being conducted in Mumbai. Sudha Devi was Sushant’s neighbour in Purina as well. She is Sushan’t cousin brother Ambrendra Singh’s wife.

This is getting sadder and sadder. Sushant Singh Rajput’s sister-in-law passes away in Bihar, she was inconsolable after Sushant’s death and had stopped eating. She took her last breath when Sushant’s funeral was being conducted in Mumbai.

Why, Sushant, Why? You were so loved 💔

Internet users devastated on hearing about this news on Sudha Devi’s sudden death and requested God to be kind to that family.

Another tragedy 💔😭. They don't deserve this 💔 Now sushant's sister in law too 💔 #SushantSinghRajput #bycottkarnjohrgangmovie pic.twitter.com/xBtr91HUSe

What the freak is happening !

I wished my fears don't come true. They are.

His suicide will be unbearable for many. Including absolute strangers who must be battling very hard battles with themselves right now

So now we've to hear that sushant's sister-in-law passed away because she couldn't survive the shock? This too upsetting man I don't know what to do :((

The cause of Sushant’s death is suicide according to Police and people from the Internet could not believe the news as he was just 34 years old with brighters future ahead. His role as MS Dhoni in the biographical picture of the veteran cricketer gained him the fame country wide.

He was found hanging in his Bandra home earlier this morning. Some of his friends were present at the spot when the body was discovered. The house door was broken and he was found hanging. The post mortem report has said that Sushant was died of noose and there is no mention of poison in the body or any other reason. Some of the initial reports has said that the depression is the main reason behind his death and his friends said that he was seen depressed for past six months which could be the main reason for this extreme step. A suicide note has not been found yet.