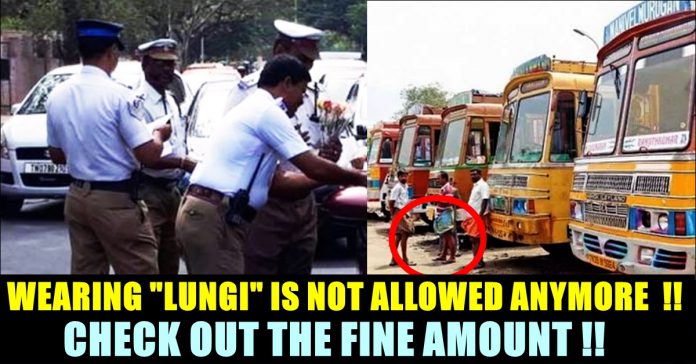 Now to our shock, even Lungi, a comfortable wear of men across India has been came under scanner it seems. Uttar Pradesh truck drivers in the state will have to pay a fine of Rs 2,000 if they are caught by traffic officials wearing a lungi or a banyan (vest), reported The Times Of India.

The steep penalty, which comes under the new provisions of the Motor Vehicles Act, aims to implement a strict dress code that has been in existence for decades. However, it was never enforced until now.

From now on, truck drivers in Uttar Pradesh will be required to wear full-length pants with shirts or t-shirts. They must wear shoes when they are driving their vehicle. The new rules are also being applied to uniforms of drivers of all school vehicles in the state.

“Now, a fine of Rs 2,000 will be imposed for dress code violation under Section 179 of the MV Act, 2019,” Poornendu Singh, ASP(Traffic), told the newspaper. He added that the dress code has been part of the Motor Vehicles Act since 1939.

Going by the report of News 18, Additional Transport Commissioner (UP) Gangaphal said that the new Act gives powers top the states to introduce safety rules and impose hefty fines in case of violation. He said that “lungi-vest” will be unacceptable in view of the dress code. “The rule will be for everyone, even if it is a government vehicle driver,” he added.

Lungi is originating from the Indian subcontinent and it is used across the country when the heat and humidity create an unpleasant climate for trousers.

What do you think on this decision of Indian government ?? Comment your views below !!

Netizens Flooding Memes On The Marriage Date Of Alia After Her Pregnancy Announcement !!

India's most loved celebrity couple Alia Bhatt and Ranbir Kapoor broke the internet on Monday by announcing their pregnancy. Surprising their fans by posting...