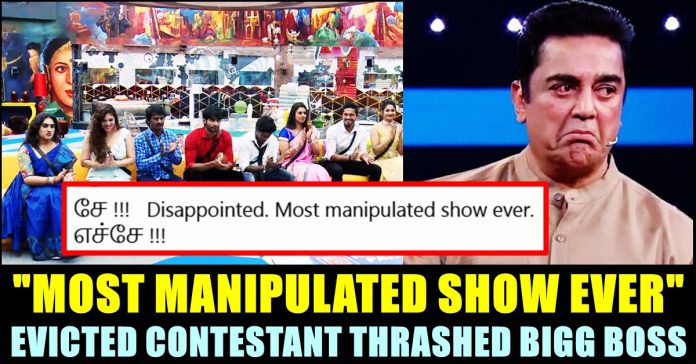 Amidst of Indian 2 shooting in Andhra Pradesh and press meets about current social issues, Kamal Haasan managed to attend the shooting of Bigg Boss’s weekend episode which was held in EVP film city, Poonamalle. The actor hosted the show with ease as usual and roasted the contestants in his own way.

Bigg Boss Tamil 3, the Ulaganayagan hosted reality show, is just a few days away from the grand finale. As the reality show is inching closer to the finale, the contestants are being tested by Bigg Boss in every possible way. The latest episodes of Bigg Boss Tamil 3 contains intense tasks yet competitive as housemates were given multiple tasks for the ‘ticket to finale’. In the weekend episode, Kamal entered the house and gave the finale ticket to Mugen who excelled in the 8 given tasks.

Meanwhile, the evicted contestant was also announced by the “Hey Raam” actor in the weekend episode. Director/Actor Cheran, who got evicted already has been evicted again by the audience of Bigg Boss. He spent 90 days inside the Bigg Boss house which includes 3 days of secret room.

Actress Kasthuri who participated in the show as wild card contestant disappointed on seeing his eviction and expressed it through her official twitter account. She wrote “சே !!! Disappointed. Most manipulated show ever. எச்சே !!!” by adding an eye emoji.

It is notable that Kasthuri often said that she entered Bigg Boss house only to learn something from an experienced artist like Cheran. She even confronted Losliya at some occasions for not showing affection to him as a daughter when he needed it the most.

Few also believed that the comment of Kasthuri surfaced once she witnessed Kavin getting saved by Kamal Haasan in the show. Kasthuri while being inside the house said that Kavin would get evicted within 2 weeks of her eviction. Check out some of the reactions for her tweet below :

Yes… Most manipulated show ever in history. #cheranrealwinner

Previous articleFans Asking BIGIL Producer Not To Praise Nayanthara !! Check Out The Reason !!
Next article“NO FOOD FOR 2 WEEKS” Assistant Professor’s Shocking Facebook Video About Her Colleagues !!

4 Criminals Entered The Classroom To Kidnap 11-Old Girl !! 3 Of Them Beaten To Death By Students !!

Three men were beaten to death by a mob on Friday which caught hold of them while they were trying to kidnap an 11-year-old...

Days ago, video of a man attacking Vijay Sethupathi at airport went viral across the media platforms with fans expressing their shock over it....