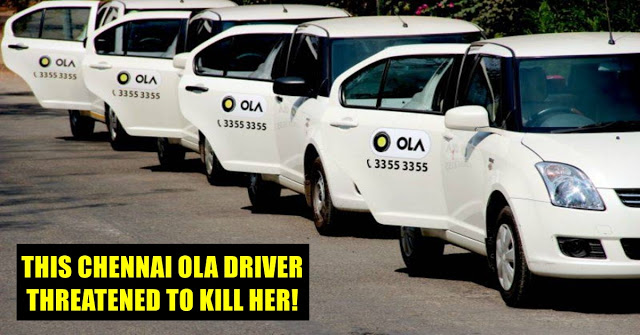 Most women these days prefer cab services as their mode of transportation even during late evenings and nights. But the recent incidents about these app-based cabs gives us serious concerns about the safety and security of women in our city.
Vilasini Ramani, a city-based publisher, said her fiancé had booked an Ola cab for her from Thiruvanmiyur to Valasaravakkam on Sunday night. The driver was going very fast and she asked him twice to go slowly. The driver denied to do so saying that he has to take a stipulated amount of rides each day. He was rude and told her that if she had a problem with his driving, she can get down from the cab.
Fearing for her safety, Ms. Ramani got out of the vehicle near the Anna University campus and tried to hail an auto. The driver, however, was waiting in the same spot and later got down, and asked her to pay. When Vilasini refused to pay him, he abused her and threatened to slit her throat. Also, when she told him she would make a police complaint, he made a few inappropriate gestures and refused to apologize.
She went to Ramapuram where she complained to police officers at a traffic outpost there. They redirected her to Nandambakkam police station. After narrating the whole incident, they told her to make the complaint at Guindy police station as it happened at that area. Fearing to go back there, she refused to return to Guindy and demanded that a policeman accompany her to her house in Valasaravakkam.
Vilasini received a call from an Ola representative, but that was a very formal call. When she asked for a mail to be sent, he said a specific mail can’t be sent and also when she asked what actions will be taken against the driver, they didn’t respond well to that.