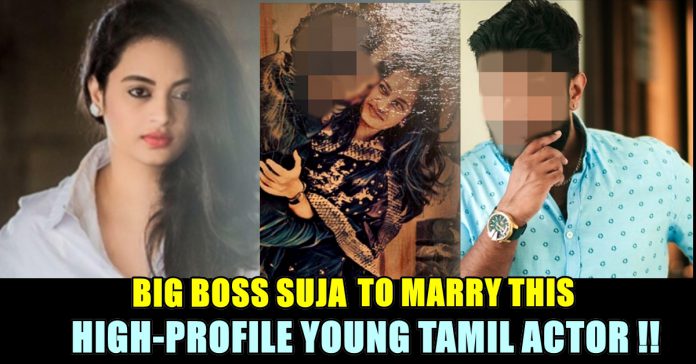 Finally, actor Shivaji Dev, grandson of thespian Sivaji Ganesan and son of producer Ramkumar, has come out in the open about his relationship with actress Suja Varunee, who hit the limelight with ‘Bigg Boss.’ Suja has been in the industry for a long doing special numbers but resolved to choose films with substance and proved in movies like Kuttram 23, Kidaari and Iravukku Aayiram Kangal. Rumors of her relationship with Shivaji were rife and reports suggested that the duo got engaged after they were spotted at Tirupati Tirumala Temple. While not refuting the rumours, Suja would have had us believe that she was denying it. She said they were friends and asked people not to spread rumours about her “false” engagement and that she would definitely inform all if there is are official updates about her personal life. He went on to say, “My birth name is Shiva Kumar” and that has changed to his original name from screen name. “As my mother passed away 2 years back I changed my screen name from Shivaji Dev to “Shiva Kumar” my birth name with her blessings, and I will continue my journey onscreen with this name! I’m the “Athaan” who she spoke about in ‘Big Boss’ I’m the only partner there is! Soon I will let you all know official news regarding our marriage! Until then we ask u to please maintain respect on this issue.”

Previous articleCase Filed Against Kamal Haasan For Visiting Victims In The Hospital !! : WTF !!
Next articleBREAKING : AB DE Villiers Announced His Retirement !! : The Reason Is Heart-Breaking !!

Since the Coronavirus outbreak, Health Minister Vijayakumar has been very much active in field as well as in Twitter. He who was busy visiting...