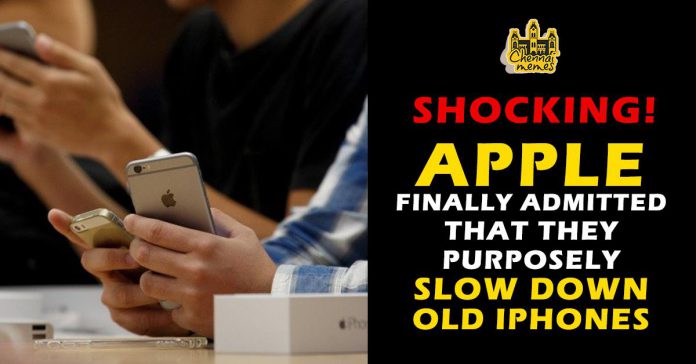 SHOCKING: Apple Accepts The Claim That They Intentionally Slow Down Old Iphones

Its always a pride for iphone owners to hold their iphones, as the iphone gives them a special feel that they possess something which is not so common.

However, there are a handful of limitations in iOS phones when compared to android phones. From Starting from internal memory, downloading audios and much more. Also battery life is not so good in iOS.

Though we all know this fact, the tech giant, Apple has admitted that they have intentionally  slowing down iPhones as they get older, without notifying customers. However they claim that,  the move is not designed to encourage customers to upgrade to newer iPhone models.

Apple is effectively saying that it’s not slowing down older iPhones just to urge people to upgrade to newer devices. Rather, the company says it’s addressing an issue with devices containing older lithium-ion batteries that results in unexpected shutdowns. Because those older batteries are incapable of handling peak current draws with the same effectiveness of iPhones with newer batteries and more efficient processors, they run the risk of the device powering down to prevent damage to its internal components.

Many iPhone users have experienced perceived slowdowns due to iOS updates over the years, it appears that there’s now proof Apple is throttling processor speeds when a battery capacity deteriorates over time.

Previous articleDear foodies, 10 Must Visit Restaurants In Chennai You Should Try Before 2017 Ends
Next articleBengaluru Man Donates Rare ‘Bombay Negative’ Blood To Save Pregnant Woman In Chennai

While addressing the party cadres at Chengalpet, chief minister Edappadi K Pazhaniswamy announced that the AIADMK government will build concrete houses for all homeless...