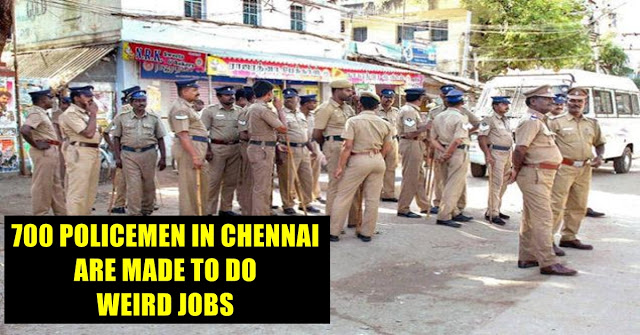 The city is getting unsafe these days and the crime rates are increasing double fold. And at times like these when we need the help and protection from our police, we do not hem receive them on time. When asked why, the officials give us a reason of shortage of policemen.
While that is not a fair enough reason to give, we hear things that these police constables are made to work meagre jobs at higher officials house for their personal use. If this is not called atrocity, we don’t know what else is.
Almost 3 percent of Chennai’s constabulary is engaged in non-policing `duties’ like carrying out household chores for serving and retired IPS and IAS officers, and in some cases even for their in-laws.
The revelation came from none other than the state director general of police Ashok Kumar at a recent law and order review meeting convened by chief secretary P Rama Mohana Rao.
A source said Kumar was prompted to reel out statistics on wastage of police personnel when Chennai city police commissioner T K Rajendran attempted to deflect criticism for the worsening image of the city police by blaming it on shortage of staff.
Asked about the additional strength required for the city, the commissioner demanded 600 policemen. Kumar said about 700 policemen, about 3% of the sanctioned strength, according to a senior official in the city, were being wasted by city police as orderlies at the houses of bureaucrats.
Orderlies are used for washing clothes, sweeping and mopping floors, cleaning toilets and utensils, gardening and bathing dogs. Policemen are trained to protect people, enforce law & order, catch criminals and make sure justice is retained, not to be used as labour men for others.
Just around this month beginning, during Swathi’s murder, when the question came why no police were present at the railway station during the early hours of morning, they gave a reason saying there was shortage of police staff and hence they are unable to provide police protection from night to morning. Just makes us wonder if those policemen who had to protect the station area, were made to protect ‘somebody’ house in that time.