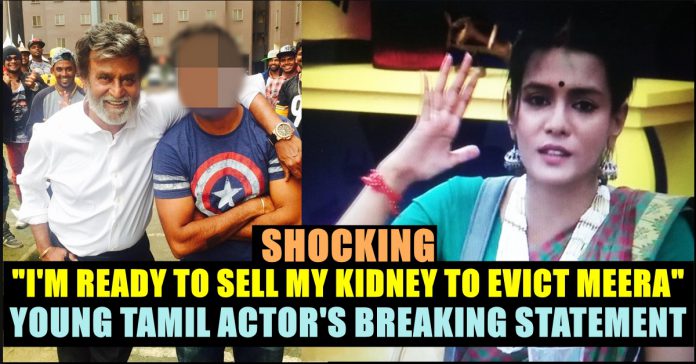 If you are not living under rock, you must have crossed a post against Meera Mithun of Tamil Bigg Boss show. Viewers of the show are desperate to eliminate the model due to her behaviour in past few episodes. Yesterday she went beyond limit and accused her co-contestant and veteran director Cheran.

She gathered every other contestant and accused him for physically harassing her during the task. Almost every contestant confronted the statement of Meera and advised her not to make an issue out of something that happened accidentally. Saravanan who has opinion difference with Cheran from the first day, came in to defend the veteran director at first. “In a game it is usual for such things to happen, you don’t have to make an issue out of it in front of everyone” he said.

As the argument took to next level, Cheran left the place and removed his mic. At one point he broke down and worried by thinking the future of his daughters. “In my 10 films, I have never kept a shot for navel and breasts. People who like me would believe me but people who dislike me would talk in my back very badly” he said to the every other contestants.

#BiggBossTamil3
There is nothing intentional in this touch..

This shit women need to be taught a good lesson and kicked out of the house as she protrayed a gentleman Cheran as some sort of a Pervert.
Feeling Sorry for #Cheran.
Men r always men.. #Meera pic.twitter.com/Jxfvq9jC5B

Meanwhile all the three promos that released today, featured Meera having an argument with the contestants of the house, especially with Sakshi.  Check out them here :

On seeing the third promo, Sathish Krishnan, popular dance choreographer and actor posted a funny tweet to express his dislike over Meera. In his tweet he said “Pls bring Meera out evalo selavanalum I’ll sell my kidney and give pls vijay tv .”

It is notable that Sathish’s choreographer in Manada Mayilada’s 1st season Sandy aka Santhosh is one of the contestant in the ongoing Kamal Haasan hosting show. The reality show, Bigg Boss Tamil 3 kick-started from June 23 and the show is already grabbing the attention over a lot of reasons. Sathish is now choreographing for the films of many leading actors such as Ajith, Vijay etc. About the ongoing issue in Bigg Boss house he is writing opinions in his twitter account constantly.

Previous articleOMG : Check How Much These Celebrities Are Charging For One Instagram Post !!
Next article“He Slapped Me In front Of Everyone” -Cheran’s Assistant Director Revealed The True Face Of Him !!

Kamal Haasan is an epitome of Tamil cinema who is now being recognised by many as a politician. His "Makkal Needhi Maiam" which is...