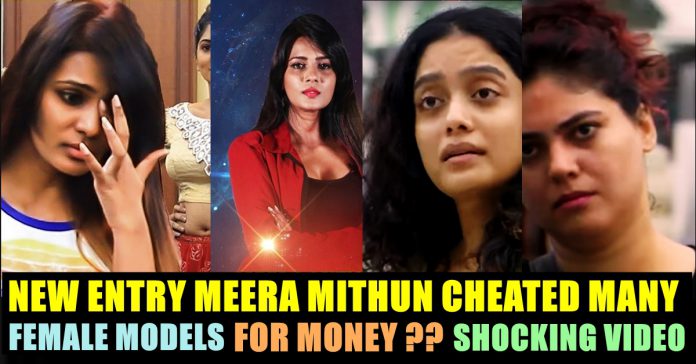 Yesterday she made her entry into the BIGG BOSS Tamil season 3 as one of the contestant. As soon as she entered the house, many housemates expressed their hatred.

“With my experience of having worked in the capacity of a zonal director in conducting Miss Tamil Nadu, I am now involved in organizing Miss Tamil Nadu Diva 2019, to be held on the 3rd of June. The people against whom I have lodged my complaint, have hacked my phone and website and have spread rumours against me on social media. They are doing this to disturb the event on 3rd June. They are also threatening my sponsors.” she said in her complaint.

In a way of denying it, Joe Michael against whom the actress made complaint, gave an interview to Behindwoods, a couple of weeks earlier. Joe alleged that she has cheated money of many beauty models in the name of conducting a beauty competitions. “By taking selfies with high profile celebrities, she would cheat models and their family” says Joe in the interview.

He also says that she lied to him about her marital status. “Meera Mithun approached me to seek help to conduct a event on Miss Tamilnadu. I accepted to help her and demanded 25% of the event budget as my agency fees. When I arranged everything for her, she called me before 3 days of the event and said that she can pay me 5,000 or 10,000 for the arrangements I made. She also said that another sponsor (Ajith ravi) wants to remove my logo from the event. I understood that it is something done by herself to avoid paying me two and half lakh.” says Joe.

He also explained how a beauty model got trapped by Meera Mithun in the interview. While Meera Mithun making her entry into the BIGG BOSS house, her fellow models, Abhirami Venkatachalam and Sakshi seemed unhappy which was captured. As three of them involved in the field of modelling, there is something happened between them in the past which left the audience go puzzled.

It is also instigates a doubt on why Kamal Haasan did not welcome Meera Mithun in the grand opening. Unlike other wild card entries in the past seasons who entered the house after 50 days, Meera entered the house on the 2nd day itself. what do you think on this curious case of Meera Mithun ?? Comment your views below !!

Previous articleSoundarya Rajinikanth Posted A Picture Comparing Her Father & Son !! Fans Got Angry !!
Next articleAbhirami Mother’s Opinion On Her Daughter Falling In Love On The Very First Day !! WATCH !!

Cameron Herrin, a TikTok user, killed Jessica Raubenolt and her 20-month-old daughter Lillia in a car accident. Herrin has hit them with his...