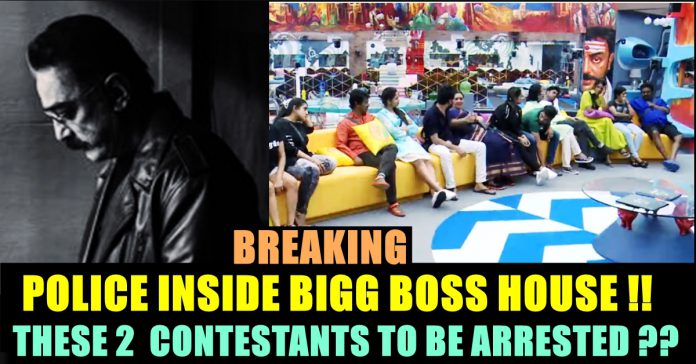 Since the start of Bigg Boss Tamil 3, the show has been grabbing headlines for the controversies. In a first of its kind, Bigg Boss show caught in controversy for something that is not happened inside the house. The Kamal Haasan hosting reality television show conducted the opening ceremony on 23rd June.

As 10 says of the show has been completed, the news today surfaced says that two of the contestants are in big time trouble for some illegal activities they are involved in. While a case with the Telangana police has been registered against Vanitha over alleged kidnapping, model-actor Meera Mithun has been charged with money laundering in a case with the Teynampet police. It is being said that the police might enter the Bigg Boss Tamil 3 house soon to arrest both the actresses. Vanitha Vijayakumar is the eldest daughter of veteran actor Vijayakumar and the late actor Manjula.

According the reports, Vanitha’s former husband Anand Raj reported that Vanitha has kidnapped their daughter and hiding her for several months in Chennai. Telangana Police approached Chennai Police to seek help in investigating her inside the Bigg Boss house.

According to the Hindu, Sources from Star Vijay confirm that police had entered the house to “conduct a formal inquiry” with a housemate. “No decision has yet been arrived at on whether the contestant will be evicted from the house. They are still in talks,” the source said.

In the case against Meera Mithun, it is said that a designer has filed case against her for money laundering. The designer has alleged that Meera cheated her by using the Miss Tamil Nadu title. She mentioned that Meera allegedly borrowed Rs 50,000 from her and did not return it. Meera won the title in 2016. It is notable that Joe Michael, an event manager told to Behindwoods that Meera Mithun is going to be arrested inside the house. He said that she betrayed several models by promising them to conduct a fashion show. Meera is yet to return back Rs 50,000 to Ranjitha who has filed a police complaint against the actress.

As two of the Bigg Boss seasons were considered as big time entertainment by Tamil audience, the third part of the show is already grabbing the attention of them due to the verbal spats between the female contestants. Including Meera Mithun and Vanitha Vijayakumar there are 8 contestants participated in the show.