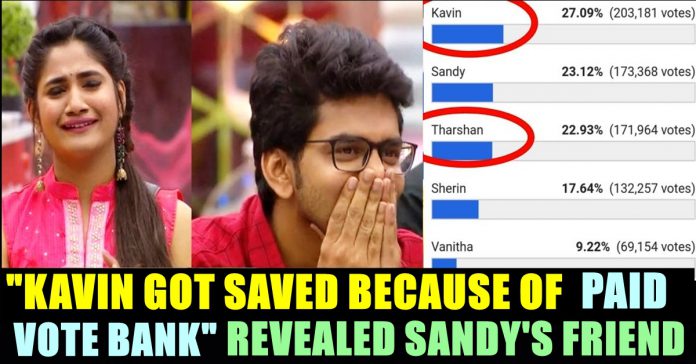 Despite of the humongous hatred he receives, Kavin managed to stay inside the house by beating Vanitha yesterday. Surprising fact is that he got saved as the first contestant among all which. It is highly believed by the viewers of Bigg Boss that the contestant who gets saved first is the one who got highest number of votes from the audience. According to that theory, Kavin is the highest number of vote getter in last week.

Now to our shock, famous dance master who appeared in the movie “Poda Podi” and dearest friend of Sandy has revealed that he is getting saved because of paid votes. “I thought Kavin would leave the Bigg Boss house way earlier. His double standards and talking with two girls simultaneously would not happen in our houses. How could it happen in Bigg Boss house alone ?? Have you ever heard of Vote bank ?? If we paid them enough money before getting into the house, all their job is to vote for us. It is very confusing if his votes are from vote bank or from general public” he said the the Behindwoods interview.

“In my house we are 4 people watching the show. We all see his behavior as a toxic. If my family thinks like that. Almost every family might think that way. Then why he is staying still inside the house ?? Have you noticed him for the past 2 weeks ?? He is mentally down and not playing the game at all. The common people who watches the show doubts his existence in the show whether it comes from the public votes or because of the channel’s support” he added.

What do you think on this statement of Jeffrey master ?? Comment your views below !!

We have seen marriages getting stopped due to various reasons all these years. But stopping a marriage ceremony which is made of huge money,...