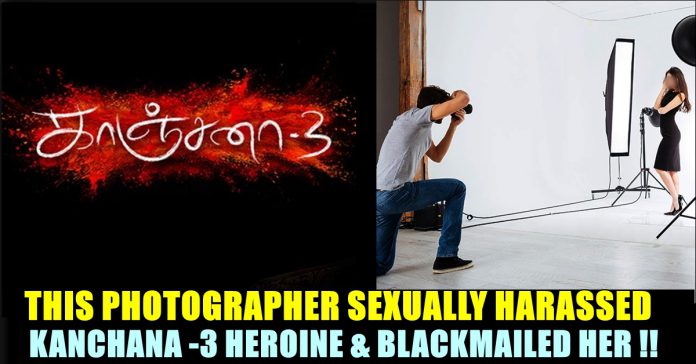 Ri Djavi Alexander is a Russian model who made her appearance in recently released Kanchana 3. She acted as one of the pair of actor Raghava Lawrence. The recent news about her is an absolute shocker as the actress registered a complaint against a photographer named Roopesh Kumar.

According to Indiaglitz, Ri Djavi is living with her husband and children in MRC Nagar, Chennai. In her complaint to the police, the actress has claimed that the accused threatened to post illicit pictures of her on social media if she were to report his actions to the police. Based on her complaint, the police arrested the accused on Tuesday. Police sources said the 30-year-old woman is a model from Russia and came to Chennai a couple of months ago.

Officials familiar with the matter said that the accused has been identified, Rupesh Kumar also runs an advertising agency. Kumar met the complainant at a pub and told her that he would like to use pictures of her for advertisements. She accepted his proposal and the two planned to meet at a hotel in Nungambakkam area for a shoot, says Time now news report. Kumar reportedly clicked inappropriate pictures of himself with the complainant during the shoot on the pretext of helping her strike a pose, an investigating official told Times of India. He then made sexual advances towards her which she turned down. However, Kumar threatened to post illicit pictures of the two on social media. The aggrieved woman met Police Commissioner A.K. Viswanathan and complained to him. On his instructions, the Cyber Crime Wing police arrested Rupesh Kumar.

In her complaint, the actress claimed that the accused continued to harass her over the phone despite her refusal to engage with him. This prompted her to approach a senior police official who helped her lodge a police complaint in this regard. A complaint in this regard was then registered at the police commissionerate and a petition also submitted on April 14. Based on her complaint, police brought Kumar in for questioning and booked him under sections 354 and 506 of the Indian Penal Code (IPC) and relevant sections of the Information Technology (IT) Act. He was later produced before a court which sent him to jail.