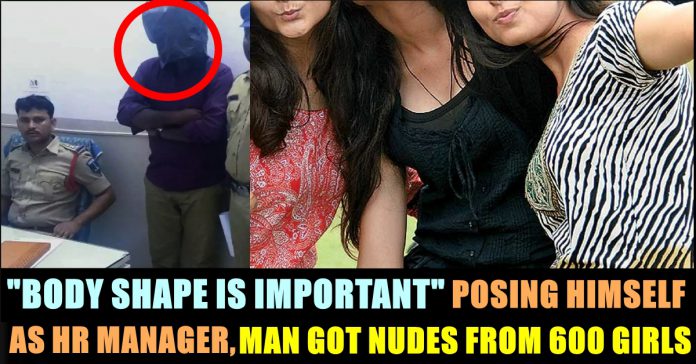 Not many days ago, the issue of Pollachi rape and blackmailing case became the subject of talking point in state Tamilnadu. Now to our shock, a chennai based techie blackmailed as many as 600 girls across 16 states with their nude pictures by posing himself as a recruiter.

The reports suggests that the accused who is named as Clement Chezhiyan Raj did this to overcome his boredom. He is married and both the wife and husband work in different shifts which made him alone and to involve in this crime initially. He made all the 600 girls to send their nude photos and videos by offering them a front desk job in five star hotel. Posing himself as Pradeep, HR manager, the accused allegedly told the women that their body shape is important to get the job.

The accused has been identified as 33-year-old Clement Raj Chezhiyan alias Pradeep, a software engineer employed by a top IT firm. Pradeep alias Chezhiyan was arrested in Chennai and flown to Hyderabad for further investigation into the allegations against him.

The News Minute report says that Chezhiyan targeted only less number of girls in Tamilnadu in a fear of getting caught. But he cheated girls in many states including Karnataka, Andhra Pradesh and Maharashtra. While being alone in home, Out of frustration and boredom he started looking at job portals from where he got the contact numbers of women who are in search of front desk jobs at five star hotels. He then started to call them by pretending himself as a recruiter and would ask them to attend the face to face interview.

In the interview, the disguised Pradeep lias Clement Chezhiyan Raj, allegedly asked the women to wait for a call from HR executive to confirm their job. Using a different contact number for Whatsapp, he posed himself as HR manager and asked girls for nude pictures by convincing them as “body shape” it is important for the customers who are visiting the hotel.

He got the nude pictures of more than 600 women in different angles and also recorded the video calls in which he made them remove their clothes. In her complaint to Cyberabad Police, a Hyderabad based woman accused Pradeep of blackmailing her for money by using her private pictures as leverage. During the course of his ‘spree’, Pradeep managed to get away with lakhs he took from the different women he fooled into mistaking him for a human resources (HR) representative working with a five-star hotel. According to Times now news An official with Miyapur Police said that Pradeep would then make a video while asking the women to strip naked on camera. He used software to record the videos and stored them in a password-protected gallery. The repeat offender used these pictures and videos as leverage to blackmail the girls and managed to rake in lakhs. Assistant commissioner of police, Miyapur, S Ravi Kumar said that gadgets seized from Pradeep’s possession have been sent to forensic labs for analysis.

“He has earned lakhs and we are planning to dig out everything once we get more time to question him,” said Ravi to ToI.

Previous articleFor Showing Too Much Of Love & Affection, Woman Wants Divorce From Her Husband !! BIZARRE !!
Next articleJonty Rhodes Shuts Down A Troller Like A “BOSS” Who Mocked Him Directly !! Check Out !!

After more than a decade, director Shankar who is known for making high budget films with advanced technology, subjected to severe online criticism for...