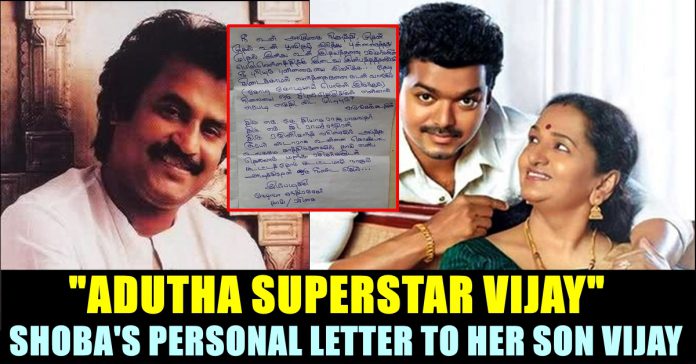 Actor Vijay is one of the very few actors who has huge fan following in South India. Having acted in more than 60+ films, he is in the top race to become the highest paid actor in Kollywood. He is expected to be seen in Atlee’s BIGIL and announced that he going to be featured in Lokesh Kanagaraj’s film after that which is tentatively titled as Thalapathy64.

On June 22, 1974, Vijay was born to S. A. Chandrasekhar who is a Tamil film director and Shoba, a playback singer and carnatic vocalist. Actor Vijay who is very much attached to his parents as every other son, married to Sangeetha on August 24, 1999, on their wish.

Initially the actor got criticized for his looks but now he turned out to be one of the actor who was huge market in Tamil film industry. As he is very busy in signing his upcoming films without gap, Vijay’s mother Shoba has wrote a letter to him yesterday.

In the letter she expressed her emotions on how much happy and proud she is for what Vijay is today. She said that she gets tears whenever she think of so many mothers around the world celebrating him as “Thalapathy”.

She wrote that Vijay was so silent even during his childhood when he couldn’t even understand the word “silent”. “I have to borrow words (despite having crores of properties) to explain from the first time you smiled to the smile you are having now because of your fans” she wrote in the letter.

“After M.K Thyagaraja Bhagavadhar, M.G. Ramachandran and Rajinikanth, the world is waiting to celebrate you as next Superstar. On seeing this I am forgetting that I am your mother and becoming one of the crores of fan who admires you and giving you a long “BIGIL” (whistle)” she added.

This letter from Shoba Chandrasekar became viral once it got surfaced on Internet and receiving various kind of reactions. Check out some of them here :

Beautiful letter to Anna Vijay #Motherlove hats off shobana madam
Thank you so much for you #BigilDiwali#Thalapathy#ennodavijayannahttps://t.co/yuCbA4GkAa

Comment your views on this lovable letter from Shoba to her son Vijay !!

Previous articleThis Number.1 Superstar Goes One Step Ahead To Save Amazon Forest !! SALUTE !!
Next articleKavin Army Threatening Sakshi To Beat Her In Public !! SHOCKING SCREENSHOTS !!