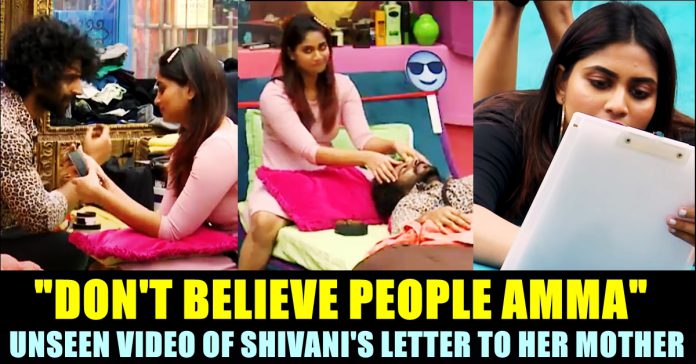 Most recently Bigg Boss conducted a task asking contestants to write a letter to their loved ones and read it to the audience. Almost all the contestants reading their letter got telecasted in the show but few of the portions were chopped due to time constraint. Shivani Narayanan’s portion got missed out which made netizens who follow the show to raise questions. They questioned the channel for not exposing Shivani much to judge her character and doubted if they are planning to make her one of the finalists by hiding her activities.

“U r not at all showing #Shivani performance in episodes. not even a single word in Strday weekend episode & in today letter task & many more. Is she is not fit for content?” a twitter user asked in his tweet by tagging the official twitter account of the channel.

U r not at all showing #Shivani performance in episodes. not even a single word in Strday weekend episode & in today letter task & many more.
Is she is not fit for content?

I know u wil make her finalist 😡#4manifans #Biggbosstamil4 #biggbosstamil

Did she write or not ?#BiggBossTamil4

However, the Television actress reading the letter written to her mother was uploaded by the Television as Unseen. In the video, Shivani could be seen calling her mother as her “support system” and tells that she misses her a lot. She asks her mother to be happy and expressed her regression over celebrating Diwali without her for the first time. “Please take care of your health. Celebrate Diwali happily and watch me celebrating Diwali in TV” she says to her Mother.

Further Shivani asks her mother not to believe what others are saying about her in outside. “Don’t mind if there are any negative comments circulating in the outside. I am following your words. Don’t believe people’s bad opinions about me until I come and say the truth to you. I think I’m playing good.” she read her letter.

“I don’t know how many days I am going to stay in this house and I believe myself the most. I have a lot more to say but this paper is not enough. So I am keeping it short” she concluded.

After seeing this unseen video, Netizens are trolling Shivani by saying that this is the “template” statement of Bigg Boss participants to their parents every year.

The Chennai based model who started establishing her career in entertainment industry since her childhood days, initially participated in beauty contests and fashion shows at state level. She debuted in Television through Saravanan Meenatchi in a minor role. After appearing in few more serials as lead, Shivani participated in Vijay Tv’s popular dance reality show “Jodi Fun Unlimited” in which she paired with her co-artist Mohammad Azeem who is expected to enter the ongoing Bigg Boss show as wild card contestant.

Actor Vijay Celebrating his 48th birthday today and the celebrities from entire Tamil film industry flooding the timeline of social media platforms with their...