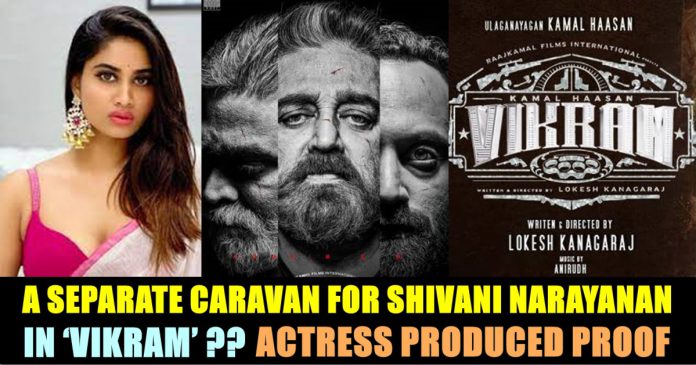 On the 4th of September, Big Boss Tamil 4 Contestant Shivani Narayanan has posted proof of her acting in the movie ‘Vikram’  directed by Lokesh Kanagaraj.

Shivani Narayanan is an Indian film and television actress who predominantly works in the  Tamil language movies and television industry. In 2020, she was a contestant on the Star Vijay tv reality show, Big Boss Season 4.

She made her television debut in the year 2016 in Pagal Nilavu as Sneha Arjun. Then she has appeared as a guest in Saravanan Meenatchi Season 3 in which she played the role of Gayathri.  She next appeared on ‘Jodi – Fun Unlimited’ as a contestant. She appeared in Kadaikutty Singam with her co-star from Pagal Nilavu. She left that serial and started a new serial in Rettai Roja in a dual role as Anu and Abi, but was replaced by Chandini Tamilarasan.

With more than 3 million followers on Instagram Shivani Narayanan is very much active on social media. She actively posts photos, videos, reels and stories on the photo and video sharing app. On Saturday of September 4, 2021, Shivani Narayanan posted a story of ‘Ask me anything’ mentioning it as, “Let’s talk #weekend.” To which Shivani answers a few questions.

On this note, a fanatic of Shivani Narayanan has asked about her performance in the movie Vikram. The question by her random follower read as, “Are you part of the biggie Vikram shiv?” In reply to this question, Shivani post a picture of a caravan given to her in which her name is mentioned.

Vikram is an upcoming Kollywood action thriller movie that is written and directed by Lokesh Kanagarj and produced by Raaj Kamal Films International. The film features Kamal Haasan, Vijay Sethupathi, Fahadh Faasil in the lead roles along with Shivani Narayanan, Kalidas Jayaram, Narain, Antony Varghese and Arjun Das in supporting roles. Anirudh Ravichander is the music director of this movie.

The trailer of the movie Vikram was uploaded on YouTube last year (released 7 November 2020). The trailer gained a good response from the audience with more than 25 million views.

Shivani’s debut movie with the legends like Kamal Hasaan and Vijay Sethupathi is gonna be a bone to her acting career. Her proof of posting the picture of her caravan for the movie makes her fanatics very much excited.

To another question which read as “You do splits akka?” Shivani posted a picture of tying it mentioning “Trying to.”

Previous articlePolimer News Getting Trolled After Streaming The Off Screen Activities Of Their News Reader By “Mistake” !!
Next articleCelebrities Can’t Keep Calm After Seeing This Picture Released By A.R Rahman !!