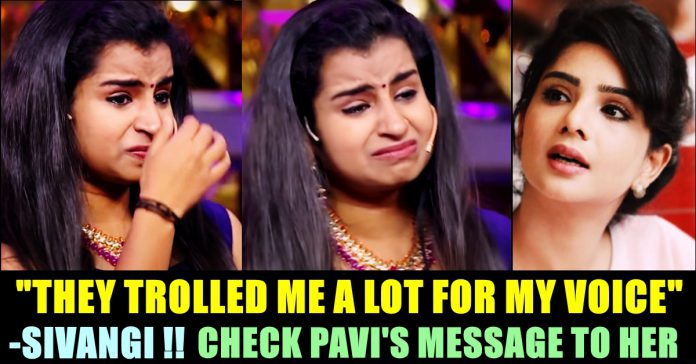 Shivangi Got Emotional While Recollecting The Trolls She Faced In The Past !! Check Pavithra’s Message To Her

A recent promo of Vijay TV’s “Cooku with Comali” program showed one of the prominent participants Shivangi getting emotional over how people treated her all these days due to her voice. Many fans expressed their love towards the singer and asked her to be the way she is. Pavithra Lakshmi, Sivaangi’s co-contestant uploaded a story in her official Instagram account saying that Sivangi is an inspiration and said that she will always be the “Chella ponnu” for everyone.

The show became a huge hit among the Television and Internet audience. Not only the ladies, even youngsters including college, school students started celebrating the show as it mainly concentrates on providing humour unlike other cookery shows. Now, a most recent promo showed Sivaangi getting emotional on recollecting the memories on how people treated her.

“Since my school days, they trolled me a lot based on my voice. Boys will look at me and say that I am girl with the strangest voice. After participating in “Cooku with Comali”, I decided to be myself. People started to look at me as their own child.” said an emotional Sivaangi.

“Nowadays, when I go out, people treat me as their own child and elderly people blessing me by keeping their hand on my head. In season 2, now they started looking me as a playful girl like Genelia” says Sivaangi amidst the applause of her co-contestants and Vijay TV celebrities.

Many of her fans expressed their love towards Sivangi by saying that she deserves all the love. “Kannu kalangiduchi ma engaluku” wrote a fan of her whereas another one said “You made us laugh during the stress times😍.. But when u cry.. It hurts us… Reach more heights🔥🔥🔥love you forever❤️”

Pavithra Lakshmi, one of the co-contestants of Sivangi in “Cooku with Comali” show uploaded a story expressing her love towards the singer. “Chellame, you are an inspiration, long way to go papa. You are and you will always be the chella ponnu for everyone” Pavithra said in her story by tagging Sivaangi.

Pavithra who also enjoys a huge fan following through her “Cooku with Comali” stint, is pretty much active in social media platforms. In a recent live interaction with her Instagram followers, Pavithra Lakshmi said that not only herself, every girl would have a crush on Pugazh as he is making people always laugh. The combination of Pugazh and Pavithra has a separate fan base as well.

Previous articleNamitha’s Husband Got Upset While Campaigning For BJP !! WATCH
Next articleWoman Accused BJP Member For Forcing Her To Have Sex In The Pretext Of Offering Her A Govt. Job !!

Top Celebrities Reaction For “SARKAAR” First Look Release !! : Can’t Get Better Than This !!

Following the commercial success of ‘Mersal’, Vijay teamed up with director AR Murugadoss for the upcoming flick, which is currently underway. While the makers...

Reports emerged saying that Madan of PUBG fame begged police to forgive him while getting arrested at Dharmapuri. Earlier, Madan, through his youtube channel,...