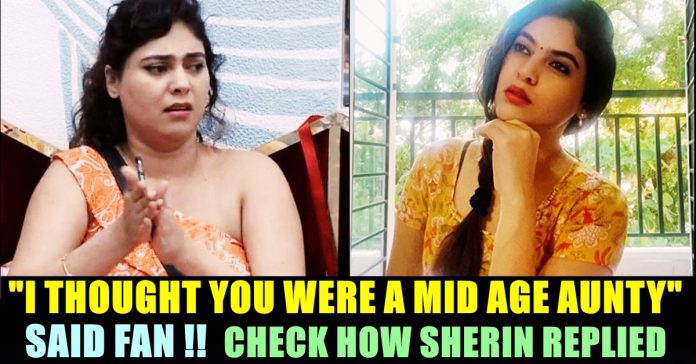 Sherin became a darling of Tamil television watching audience through the last season of reality game show Bigg Boss which was hosted by Ulaga nayagan Kamal Haasan. Since the end of the 100 days show, the actress is keeping her followers busy by posting her pictures and videos in her official Instagram account in which she enjoys more than 8 lakh followers.

Debuted through “Thulluvatho Ilamai” with Dhanush, Sherin went on to act in films like “Whistle”, “Urchagam”, “Bheema” etc. After several attempts, she managed to grab a spot in the heart of Tamil audience only through Bigg Boss show. Her outspoken attitude and morning dance moves made youngsters to fall in love with her. She was the first ever contestant in Bigg Boss Tamil history, who was never nominated for eviction within the first 10 weeks of the show and she emerged victorious as the 3rd Runner Up of the season.

After Bigg Boss show, Sherin gave another surprise to her fans follower with her body transformation. Unlike during the Bigg Boss show, in which she looked a bit chubbier, the actress now completely reduced her weight and looked like a girl whom we saw in “Thulluvatho Ilamai”. One of her recent post evidently showed and one of her follower couldn’t keep calm on seeing the post.

The follower said that she looked like a middle aged aunty while entering Bigg Boss house. “But now I’m regretting for that.. You are getting younger day by day… I have no idea what you are doing… Still you are looking gorgeous 😍 😍… Young sherin is less charming compared to this one🔥” his comment read.

To that comment, Sherin came up with a reply expressing her thoughts and opinions about people are making quick assumptions based on appearances. She said that they are proving the point that we are living in a superficial world and reinforcing the concept of self love and self acceptance.

Previous articleJulie Replied To A Follower Who Asked Her To Die !!
Next articleBREAKING : Trump Warned India To Export A Key Drug !! Here’s How India Responded