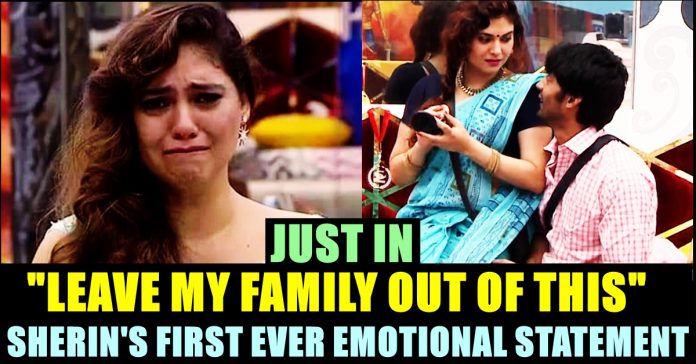 Actress and Bigg Boss contestant Sherin opened up for the first time regarding the issue that took place between her co-contestant Tharshan and his former girlfriend Sanam Shetty. The “Thulluvatho Ilamai” actress made her statement through her official Instagram account in which she enjoys more than eight lakh followers. Few followers of the Bigg Boss show are still thinking that Sherin might be one of a reason for the break up between Tharshan and Sanam Shetty.

In her statement Sherin said that there are lot of bigger issues in this world comparing to a love break up between two people. Sherin said that she could bear people calling her nasty names with a smile but the actress asked them to leave her family alone. “Blaming me for someone else’s mistakes doesn’t make me guilty, it just makes you narrow minded and short sighted, learn to assign blame properly” Sherin wrote in her post. The relationship between Tharshan and Sherin inside the Bigg Boss house made online people to stalk her regarding the issue.

She further asked the netizens not to make the mistake of thinking her silence as her mistake. She said that she didn’t make any statement because that issue didn’t involve her. “If venting on my comments section gives them some peace, let them!” said Sherin to her true followers. “This will be my only and official statement on the issue and I will not be entertaining questions and reactions on the same again” she wrote in her post.

It all started when Sanam Shetty registered a complaint against Tharshan by accusing him for cheating, fraudulent, breach of trust, women harassment and threatening in the commissioner office, Chennai. This made Tharshan to gather media to give clarification. In the press meet, Tharshan denied the allegations against him and tried to justify himself in front of the reporters.

Tharshan who denied her allegations has said that he bought no money from her and paid back the only three and half lakh rupees she spent for him as soon as he received the payment from Bigg Boss. He further added that Sanan Shetty blackmailed him to kill herself and demanded him to declare her as his fiancee in front of media. However, there is no further updates about Sanam’s complaint so far.

Actress Vinothini who is predominantly appearing in Tamil films as a supporting artist, took an indirect dig at India's finance minister Nirmala Sitharaman based...