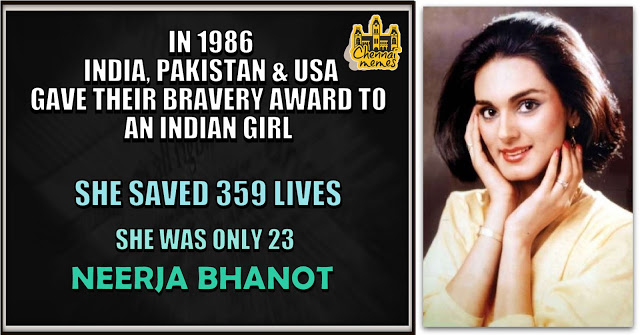 You might have seen the trailer of upcoming Bollywood movie Neerja starring Sonam Kapoor. Here is her story :-

11th Jan 2016 would have been Neerja’s 52nd birthday, but PAN AM Flight Attendant Neerja Bhanot of Chandigarh, India died at 23 being a hero. She is credited with saving the lives of 360 passengers onboard PAN AM 73. When radical Islamic terrorists hijacked her A/C in Karachi, Pakistan she informed the pilots (who used their escape hatch to runaway) and kept both the passengers/remaining crew calm. When the terrorists demanded to know who the Americans were on the flight so they could execute them she gathered all the passports and hid the ones belonging to Americans under seat cushions. The terrorists confused and unable to determine the national origins of the passengers didn’t execute anyone. When Pakistani police raided the plane she was able to nearly singlehandedly evacuate all the passengers as the firefight ensued. She being one of the last people on board did a last check and found three children still hiding. As she led the children to safety the surviving terrorists spotted the children and opened fire on them. Neerja jumped in the way of the bullets and was mortally wounded. She was able to evac the children to safety before dying from her wounds.
Neerja was awarded the Ashok Chakra Award by India, the highest peacetime gallantry award possible. She was the youngest and first civilian to ever be awarded this honor.