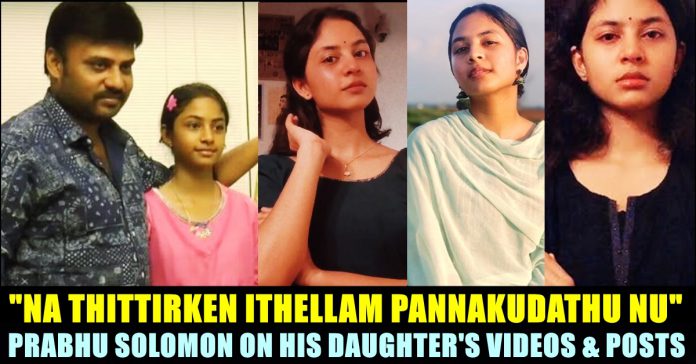 Ahead of the release of his “Kaadan” starring Rana Daggubati, Vishnu Vishal, Pulkit Samrat, Zoya Hussain, Director Prabhu Solomon is pretty much busy taking part in interviews of youtube channels. The film which got released on 26th of March, is receiving mixed reviews from the critics and audience. During one of the interviews, the filmmaker opened to a question asked about his daughter’s existence in social media and about her interest in acting in films in the future.

The filmmaker who is known for making quality films such as “Mynaa”, “Kumki”, “Kayal”, in an earlier interaction with a youtube channel, said that he doesn’t like her daughter’s social media activities. He said that he advised her as a father and asked her to stop it as he doesn’t want her to involve in such things. Now, in a recent interview, Prabhu said that she is just having fun as she is currently studying in a college and opened about himself scolding her regarding the same.

When he was asked whether his daughter is going to appear in films in the future, Prabhu solomon said that there is no chance for it and added that she is preparing for her UPSC. Hazel Shiny, a popular Tik Toker who used to have millions of followers in the micro video uploading social media app, has been uploading her recreations in Instagram as reels since the app got banned in India.

She who is enjoying 6 lakh plus followers in Instagram, has a separate fan base in social media platforms for her recreations of Tamil movie dialogues and songs. Only after raising to fame, public came to know that she is a daughter of a renowned filmmaker. The 20 year old online star is being followed by some of the notable names of Kollywood which includes Amritha Aiyer, Vani bhojan, Rio Raj, Lakshmi menon, Shanthanu and many others in Instagram.

Check out some of her recent reels below :

Now, talking about her online stint, director Prabhu solomon said “There is no chance for her to enter the film industry. While studying in a college, they make some fun by teasing each other. I strongly oppose her doing it and even scolded her several times to make her stop her doing it” Director Prabhu Solomon said.

“She is preparing for her UPSC and has a long journey towards it. This is just a fun she is having during her college days as we did in our college days. She is not even having a small amount of wish to become an actress in the future” he added.

“I am a person who is leading a spiritual life. So I have to condemn her on few things as a father. I have advised her to stop it.” said Prabhu Solomon in an earlier interview with a youtube channel. “It was something she did for fun. She herself didn’t expect the reach. However, I have asked her to stop it” he said months ago. Read : “I Have Advised Her To Stop It Completely” – Director Prabhu Solomon !! WATCH

An Instagram story uploaded by Kerala based cricketer Sanju Samson after the world cup squad announcement from BCCI is going viral among the online...