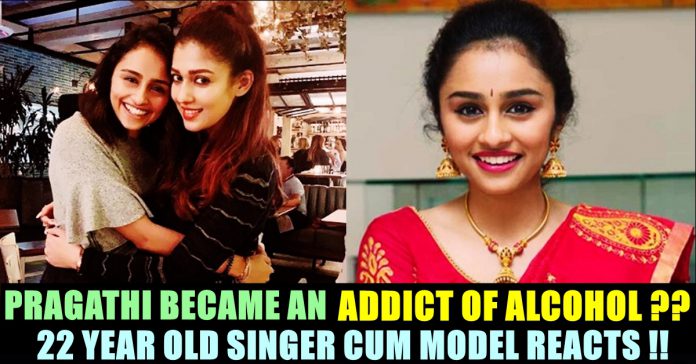 Singer Pragathi Guruprasad who rose to fame through the reality singing show of Vijay Television, “Super Singer Junior”, is currently involved in modelling. She became the runner up in the third season of the show and got widely recognised by the audience of Television. The 22 year old artist, reacted to a recent report that said that she became an alcoholic addict and started exposing herself for money. The singer said that she is not going to waste her energy on reacting to such baseless allegations.

In the article which was published in a portal named as “Cinemapettai”, it is said that the actress has became an alcoholic addict at the age of 22. “She is always carrying a liquor bottle with her. She also started having more boyfriends in the name of modelling” the gross report read.

This particular piece grabbed the attention of many of the followers of Pragathi it seems. She who is enjoying 5 lakh plus followers for her Instagram account, posted a story asking her followers not to believe everything they read on Internet.

Further, to those who asked her to report the media and to sue the media, she said that it’s not worth any of her time or energy. To the one who are being mean and terrible to her, Pragathi added an upside down face.

“Don’t believe everything you read on the internet” she added a laughing emoji. “to those of you messaging me to report the article / sue the media, it’s not worth any of our time or energy. to those of you being mean and terrible to be” she wrote and added four dots with an upside down emoji.

Pragathi was supposed to make her acting debut through Bala’s “Thaarai Thappattai”. However, she opted out owing to her college commitments. In 2016, Director Bala announced that he is going to cast her as a lead actor in his upcoming project. The project got shelved before beginning production due to unknown reasons. As far as her singing career is concerned, Pragathi has collaborated with some of the top music directors of Kollywood film industry such as Yuvan Shankar, Anirudh Ravichander, G.V Prakash, Santhosh Narayanan etc.

It is high time for people to realize that even if Pragathi consumes alcohol, it is not a topic that is meant for discussion. Making a fuss against an individual for drinking alcohol and for wearing less clothes in this Internet era ?? Seriously ?? Comment your views on the news published and on the way the signer handled it !!