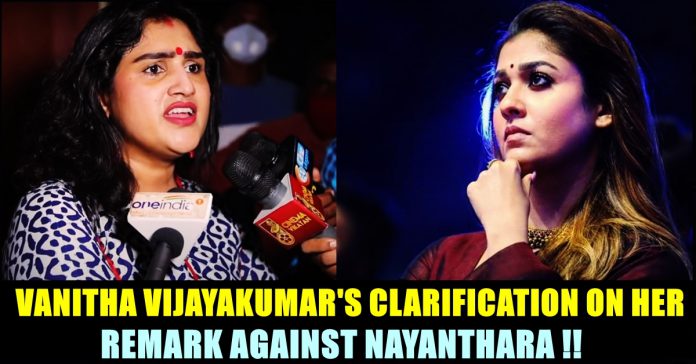 Vanitha Vijayakumar registered a police complaint against Lakshmi Ramakrishnan, Producer Ravinder, Kasthuri and Suriya Devi on Tuesday and appeared for a press interview. The actress said that no social reformer or twitter celebrity supported her when she was struggling with her personal life due to various reasons. “But today, when a woman who doesn’t belong to cinema industry is facing a similar problem, people are supporting her” said Vanitha to the press.

Vanitha said that she was approached to host the “Nerkonda Parvai” show in Kalaignar TV before Lakshmy Ramakrishnan. She said that there are Police, law and court to solve the issues faced within family. “Stating opinions, intervening in the personal issues of other’s life and making it public only to humiliate the family is what such programs are doing. There are legal ways to get justice to those issues” said the Bigg Boss star.

It all started when Vanitha Vijayakumar and Peter Paul appeared in a interview in their own channel. Elizabeth Helen, wife of Peter Paul seeked Lakshmy Ramakrishnan’s support after watching the interview in which Peter Paul accused his wife with various allegations. On seeing the video, Lakshmy said that the way Vanitha and Peter Paul behaved during their conversation is completely unacceptable and stated that their behaviour is “Atrocious” in the video.

Vanitha Vijayakumar who got irked, appeared in a live interaction with Lakshmy and abused her directly for involving in her personal issue. Thing turned ugly when both of them degraded each other by attacking their characters. The video went viral with various reactions in online platforms.

In the interview, Vanitha said that Kasthuri has personal vengeance on her due to the confrontation took place between them in Bigg Boss show. “She is trying her best to damage me. I feel pity of her as she couldn’t do anything against me inside the Bigg Boss house and now”. Vanitha said who further added that she feels proud on seeing people opening youtube channels only to upload things against her. “Many people are trying to make a life out of me. I feel very happy but there’s a way to earn money. If you are abusing someone to earn your bread, you better die of starving” the actress said.

Regarding why she dragged Nayanthara’s name, Vanitha said that it was asked by a fan and she just replied to it. “Why are you questioning Vanitha alone ?? That’s what I asked. It was asked by a fan. This happened in the lives of many celebrities including to those who are working bollywood. Why are you not calling them as Bitch ? Why are you personally attacking me alone?? she asked.

“No one has the rights to do personal attack on anyone. Just because she is acting as heroine today, you can talk ill about me ?? We all are women right ?? I just asked why they didn’t raise voice then. I don’t have anything against Nayanthara. In fact, I admire her. She is a real lady Superstar because she went through all that and now excelling in the industry. She is giving back to her haters in style through her works. I will do the same. I am not trying to accuse her. I simply asked them if they have the guts to question a celebrity like Nayanthara. The fan included Kamal Haasan as well. Even the leaders who ruled Tamil nadu married twice and thrice. Why are they questioning me alone ?? I can talk back too. That’s why they are running off me.” said Vanitha.

Earlier, One of a follower of Vanitha said that the media channels and people like Lakshmy Ramakrishnan have no face to call out big names like Kamal haasan and Nayanthara who were involved in a number of relationships in the past. Reacting to the tweet, Vanitha asked Kasthuri and Lakshmy Ramakrishnan to state their opinions on it.

“is nayanthara also a #bitch when she was living with prabhu deva.. why didn’t u voice out for his wife ramlath who was also mother of 3 and going to court and media?” asked Vanitha by tagging their official twitter accounts.

Previous articleDalit Man Beaten Up By A Group Of Men For Touching A Upper Caste Man’s Bike !!
Next articleVijay & Ajith’s Director Feels “Sangi” Is A Better Word !!