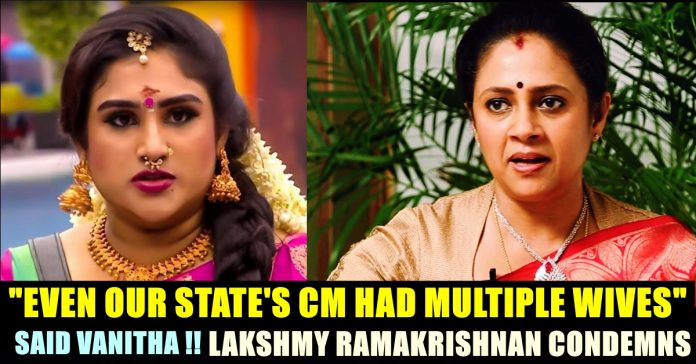 Reacting to the statements said by Vanitha Vijayakumar in a recent video call interaction she participated with Producer Ravindran and actress Rithika, Lakshmy Ramakrishnan has demanded her to apologize. The “Yuddhan sei” actress said that Vanitha insulted every Tamil woman through her statements.

It all started when Vanitha Vijayakumar and Peter Paul appeared in a interview in their own channel. Elizabeth Helen, wife of Peter Paul seeked Lakshmy Ramakrishnan’s support after watching the interview in which Peter Paul accused his wife with various allegations. On seeing the video, Lakshmy said that the way Vanitha and Peter Paul behaved during their conversation is completely unacceptable and stated that their behaviour is “Atrocious” in the video. Vanitha Vijayakumar who got irked, appeared in a live interaction with Lakshmy and abused her directly for involving in her personal issue. Thing turned ugly when both of them degraded each other by attacking their characters. The video went viral with various reactions in online platforms.

Now, Vanitha, in her first ever face to face interaction with Producer Ravindran, asked him to help Elizabeth legally instead of appearing in youtube interviews. Further Vanitha said that a man having multiple affairs is not something new in our tamil culture. She said that no Lakshmi Ramakrishnan or Kasthuri stretched their supportive hand when she was suffering with mental abuse by her former partner.

She also explained to Ravindran how a court will function in reality. “Court will not function as in cinema. Even Lawyer couldn’t speak in front of the judge. Only facts will speak.” the actress said. “The practice of first wife and second wife is not something to Tamil nadu. I can list several cinema celebrities and politicians who married to two or more people. Even I can name former chief ministers of our state. Do you have guts to talk ?” asked Vanitha to Lakshmi Ramakrishnan, Kasthuri and Ravindran.

Lakshmy Ramakrishnan who saw the video said that Vanitha has insulted every Tamil woman. She said every human with self respect would have boiled from inside on seeing the video. “She insulted every #Tamil woman , #Maanam ulla every human boiled from inside, one ‘YES’ from me , they would have dragged her to the streets & made her to apologise. But one thing prevented me from saying ‘YES’, it will become a law & order issue, during this #Covid situation.” read her tweet.

She insulted every #Tamil woman , #Maanam ulla every human boiled from inside, one 'YES' from me , they would have dragged her to the streets & made her to apologise. But one thing prevented me from saying 'YES', it will become a law & order issue, during this #Covid situation. pic.twitter.com/UnYOkaX6KT

Lakshmy also added another tweet saying that Vanitha contempt court. “She has the audacity to comment how a court functions and the Judge listens to a case!!” she wrote in her tweet.

Throughout the interview, Vanitha Vijayakumar insisted on Ravindran to help Elizabeth legally instead of appearing in youtube interviews. The actress deactivated her social media accounts seeking peace after Kasthuri released videos regarding the production house of Peter Paul.

Previous articleCheck How North Indians Are Celebrating “Anjaan” !!
Next articleRajinikanth Reacted To The “Karuppar Kootam” Issue !!

Video of an individual named Rangarajan Narasimhan advising his fellow Brahmin priests to stay in house to protest the appointment of non-Brahmin priests is...