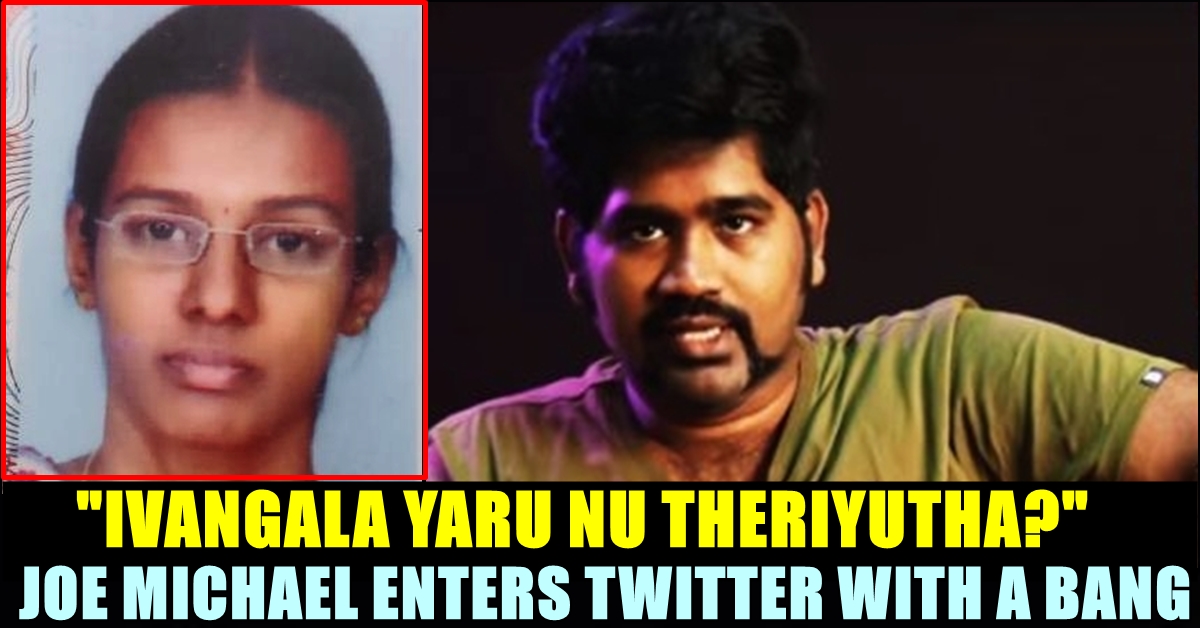 Joe Michael, a chennai based businessman who is very much known among Tamil online users for confronting Meera Mitun during her Bigg Boss times, wasn’t seen appearing in interviews for past few months. Now, on seeing the baseless accusations being made by the self proclaimed model against top-tier actress, Joe made a come back and is constantly exposing Meera Mitun through his twitter account and by giving interviews for youtube channels.

Former Bigg Boss contestant Meera Mitun has been making baseless allegations against actors Vijay and Suriya for past few weeks. She said that they both are the product of Nepotism and involving verbal spat with the fans of the actors in Twitter.

Lately, Meera Mitun released a video threatening the fans of actors Vijay and Suriya to defame the wives of the actors which created huge outrage among the fans. Online users demanded Suriya and Vijay to file a defamation case against Meera Mitun for her derogatory comments about their personal lives but a set of fans wants them to ignore Meera Mitun as she is expecting them to react in order to gain wider fame.

Despite several celebrities including senior actress Kasthuri, Vijay’s best friend Sanjeev, senior director and actor Chithra Lakshmanan, upcoming filmmaker Vignesh Karthik, Harathi, Sanam Shetty condemned the act of Meera Mithun, she hasn’t stopped as we can see tweets and videos of her against the high profile actors flooding the twitter feed. Even the attempts made by fans couldn’t stop her from defaming the actors and their wives. Now, to shut her down once and for all, Joe Michael became active in twitter and started exposing her.

He posted an oldest passport size picture of Meera Mitun and sarcastically said that he couldn’t identify her and seeked the help of twitter users to identify her. He said that she requested him to recharge for Rs.49 and absconded permanently. He also said that she approached him to get an opportunity. “Ivangaaalaaa Yarrukaavadhu Theriyumaaa!!! ENKITTA Showku chance ketanga Apddiyey oru 49rs recharge kettanga ..pannitennn..appuram abscond aiytaanga ..konjam vaangitharingalaa Yaaravadhu Pls” read his tweet which going insanely viral in social media platforms.

Check out his other tweets about the “Super Model” below :

Thats the moment she came to my birthday party and texted me in my messenger for getting a chance to do chennai fashion shows 🤣🤣 Super model enkitta chance pitchai ketkum bodhu eduthathu🤣🤣 Veral Soopera modelku vandha sodhanai🤣 Gonna Reveal Untill She stops!! STAY TUNED pic.twitter.com/MDz4ujoYfk

Meera Mitun who hasn’t responded to these tweets of Joe, continues to defame actor Vijay through her tweets. Here’s the recent one :

Believe me, it's easier just to pretend.
But, I won't apologize for who I am.

Comment your views on these tweets of Joe Michael !!

JUSTI IN : Lakshmy Ramakrishnan Demanded Rs.1.25 Crores From Vanitha !! Vanitha Replied
“Why Is Even Following Her?” Netizens Questioned Modi !!