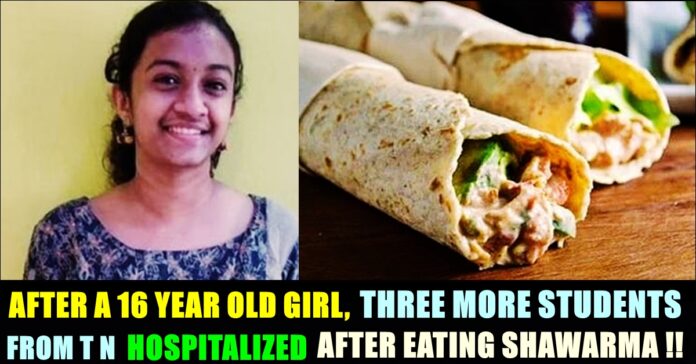 After the death of a 16 year old girl who died of eating “Shawarma”, Officials of the Tamilnadu food safety department have taken steps to crackdown on Shawarma shops that fail o maintain hygiene. The Commissioner, department of Food safety, Tamil nadu has issued directions to the officers in the district to carry out inspections at shawarma shops and submit a report soon.

The 16 year old girl has been identified as Devananda and was admitted to a hospital named Chevvathur. Later the evening, a dozen other people were admitted to the hospital over the sickness that caused by eating Shawarma at an eatery located in “Chevvathur”. As soon as the reports on a number of Shawarma making food eateries violating the rules and selling expired food items surfaced, hashtag “Shawarma” is trending in the social media platforms with online users calling out the roll like north Indian food item.

Designated food officer of Kancheepuram and Chengalpattu named T. Anuradha alongside her team inspected shops at several locations in Kancheepuram on Wednesday including Rangaswamy Kulam, Kaavalan Gate, Keerai Mandapam and Kamatchi Amman Sannathi street among the others.

16-year-old in Kerala dies, 49 others ill after eating chicken shawarma

Nearly 10 Shawarma shops were found to be violating the guidelines issued by the Food Safety and standards Authority of India. The officials have taken samples from certain shops and have sent them to the food lab in Guindy for analysis. Officer Anuradha said that they inspected a total of 13 shops and 10 of hem were found to be violating the regulations as a result of which they have been fined Rs. 2000 for using single-use plastics.

Speaking to the media, Anuradha said that they were not satisfied with the hygiene and sanitation conditions. “We inspected storage points, the temperature in which the food items are maintained in the freezer, whether old chicken has been used etc. We enquired the shop owners whether they had adopted any pest control method and how they are disposing with the of the waste items. We also inspected the raw materials which were used to make Shawarmas”

Now, to our shock, reports surfaced saying that three students fell sick due to food poisoning after consuming Shawarma at Orthanadu in Thanjavur, Friday. I has been reported tha the students consumed Chicken Shawarma in a fast food hotel and returned back to hostel. Within minutes, the students developed health issues including vomiting. They are stable now after being admitted to Orathanadu Government hospital, according to report. It is also notable that Food safety eam raided several teams in Madurai and  seized 10 KG of stale chicken from five shops

Hashtag “Shawarma” started trending in he micro blogging social media site with reactions such as memes and posts flooding the internet making fun of Shawarma. Check out some of them below :

Eat shawarma do nothing 🥰#Shawarma pic.twitter.com/UJ9eDEuCvt

#Shawarma
Stop eating on streets, who’s not wearing gloves, who’s nails so dirty,
Where there’s no neatness and hygiene..who’s same bowl of water to clean tea cups from morning to night.

Incidents like this create panic among people! Restaurants focus on money and not human lives! They might escape from legal charges but what about the lost life? @fssai every month this is happening in some restaurant! #Shawarma

Serving food is understood to be one of the most nobel service. It is imperative for restaurants to ensure the food served is of utmost quality, especially when you’re having ur customers pay for it. Don’t play with lives of innocent people who trust & eat your food.#Shawarma

#Shawarma Eating Habits and Its Consequences are on the rise. Some variation in eating habits is needed among young people.

New CCTV footage, showing the suspect in the murder of 24-year-old Swathi at Nungambakkam station in Chennai, has been released by the Government Railway...