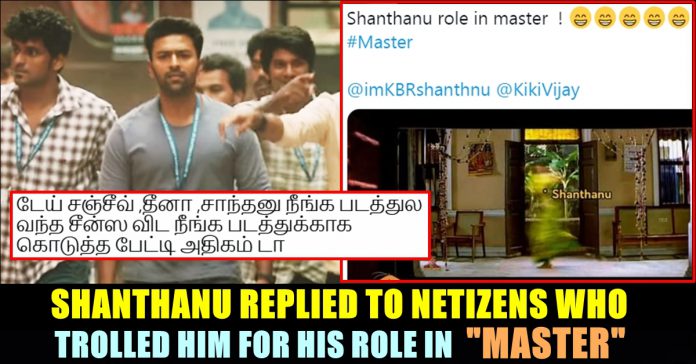 Ever since the film “Master” released in the theatres of Tamil nadu, trolls targeting the supporting actors of the film kept surfacing in the internet. Based on their limited screen time, users of social media platforms made memes to troll the actors. Actors Shanthanu, Deena, Andrea, Malavika Mohanan, Sanjeev became victims of the mindless trolls in social media. For uploading a throwback video of practicing Archery, followers of Andrea Instagram account made fun of her in the comment section. Now, actor Shanthanu came up with a tweet, writing how much the project “Master” means to him irrespective of the screen time.

In the film, Shanthanu played the role of Bhargav, a college student with an influential background. He who initially dislikes Gouri Kishen for standing against him in the college election, ends up having a strong bond with her. However, Bhavani, to avenge JD, kills him by staging a road accident. Many fans who expected Shanthanu to play a significant role in the film, started trolling him after seeing the movie.

Shanthanu was the Bobby Simha from Petta in Master

Shanthanu gave more interview than the number of shots where he would appear In the film . To be precise he was shown in exactly 8 shots in the film . When opened youtube he has given 35+ Interviews from the day master title was announced . Wtf da ? #shanthanu #Master

Replying to these trolls, Shanthanu uploaded a tweet in his official Twitter account saying that it’s still an achievement to be part of such a magnanimous project. He said that it doesn’t matter if it is a singe scene or full movie and said that he feels proud to be a part of such project. He also added the video of himself celebrating the first day first show of “Master” in Rohini theatres.

“Oru scene oo, muzhu padamo.. it’s still an achievement to be part of such a magnanimous project & I’m proud of it” said Shanthanu in his tweet.

Here’s the message of the fan :

“I Take Print Outs & Screenshots Of Memes To Correct Next Time” Director Hari Opens On Trolls !!