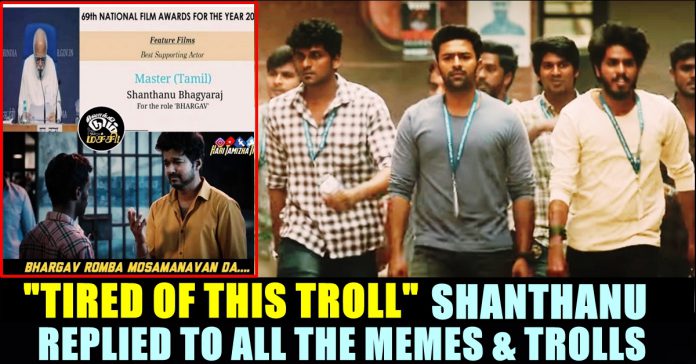 After the official announcements on the 67th national award for films were made, many memes, trolls and reactions surfaced online trolling the character played by actor Shanthanu in “Master”. In a way shutting them once and for all, the young actor came up with an emotional tweet sharing one of memes in his official twitter handle. The actor said that he will make the memes come true one day and his reply will be a “smile” on that day.

Ever since the film “Master” released in the theatres of Tamil nadu, trolls targeting the supporting actors of the film kept surfacing in the internet. Based on their limited screen time, users of social media platforms made memes to troll the actors of the film. Shanthanu, Dheena, Andrea, Malavika Mohanan, Sanjeev became the primary victims of the mindless trolls in social media.

In the film, Shanthanu played the role of Bhargav, a college student with an influential background. He who initially dislikes Gouri Kishen for opposing him in the college election, ends up having a strong mutual bond with her. However, Bhavani, to avenge JD, kills him by staging a road accident. Many fans who expected Shanthanu to play a significant role in the film, started trolling him after seeing the movie.

A scene where JD defines Bhargav as a deadlier rowdy comparing to all the henchmen of Bhavani, became a widely used meme template in recent times due to the flaw in the character arc of Shanthanu in the entire film. Now, after the announcement of 67th National awards for films, many social media users started making memes fictionally denoting that “Bhargav” character won Shanthanu a national award for Best supporting actor category.

On seeing the memes, actor Shanthanu who is pretty much interactive with his followers in social media platforms, came up with a tweet saying that he would make the fictional memes to come true one day. The actor said that he got tired of these trolls and thanked the people who are trolling him for causing a vibe. “It will surely happen as you people have said it” said Shanthanu by sharing one of the memes and ended his tweet by writing “Love- Bhargav”

“The smallest joy one gets from trolling another. Tired of this troll but thanks to all d stones thrown at me for knowingly or unknowingly sending out vibes into d universe… நீங்களே சொல்லீட்டிங்க, நடக்காம போயிடுமா? This WILL happen one day&my reply will be a “smile” Love- Bhargav” read the tweet of Shanthanu.

The smallest joy one gets from trolling another🙂Tired of this troll but thanks to all d stones thrown at me for knowingly or unknowingly sending out vibes into d universe…
நீங்களே சொல்லீட்டிங்க, நடக்காம போயிடுமா?
This WILL happen one day&my reply will be a “😊”

Previous articleCheif Minister Edappadi K Pazhaniswamy Replied To A.Raja’s Slipper Jibe !!
Next article“He Looks Smarter Than Me In Every Way” – Sivakarthikeyan On Seeing This Debut Hero