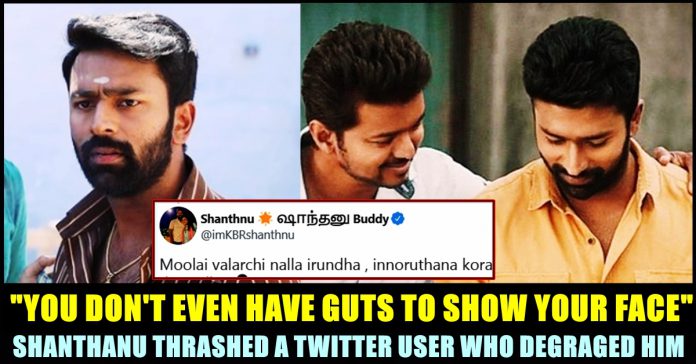 Tamil actor Shanthanu who is pretty much active in social media platforms, on Friday, reacted to a twitter user who spewed hatred at one of his recent posts. In a post which looked like a movie promotion, the twitter user named Psuedo Liberal, uploaded a comment saying that promotions in Twitter is not needed if he acts well in films. The reply grabbed Shanthanu’s attention and the actor replied to it saying that he won’t be commenting that way if he has brain will good growth. The exchange didn’t end there as the user continued to verbally attack the emerging actor.

Shanthanu is one of the emerging actors of Kollywood film industry who is desperate for a break as of now. He was last seen in Vijay’s “Master” and is currently acting in a number of films as lead. On Friday, in a tweet, which seemed to be intended for a movie promotion, he tagged his fellow Kollywood actor Harish Kalyan and wrote “Bro @iamharishkalyan… Dint expect this from you … why did you cheat me ? Pls answer me”

Bro @iamharishkalyan …
Dint expect this from you … why did you cheat me ? Pls answer me

Among the several kind of reactions that surfaced for the post, a user dropped a comment saying “This won’t be necessary if you act well in films” by writing “ஒழுங்கா படம் நடிச்சா இது எல்லாம் தேவைப்படாது”

“Moolai valarchi nalla irundha , innoruthana korai solla thonadhu” Shanthanu replied as soon as seeing the comment which literally translated as “If you have a brain with good growth, you will not be finding flaws in others”

“If you worship your job with uttermost devotion and purity, your heart won’t think in a cheap way like this” the twitter user further commented to which Shanthnu replied back saying “Valarpu nalla irundha innoruthan pathi visaarikaama vimarsikka thonadhu! Kelambu thambi! Sondha moonji kaatadhavan kitte idhuku maela time waste panna mudiyadhu” which means “If you had a good upbringing, you won’t be criticizing others without knowing about them completely. Get lost. I can’t waste more time on someone who is not even showing his face”

Woman Refused To Get Help From Muslim Vodafone Employee !! Got Thrashed Brutally !!

Almost every one of us dreaming of a atmosphere where no religion or caste partiality between common people exists. But a very few who...