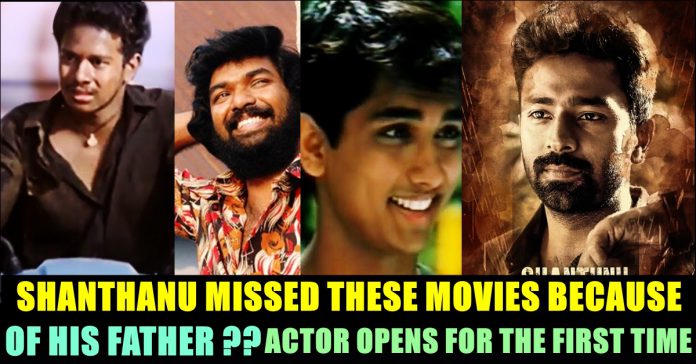 Being an ardent fan of actor Vijay, actor Shanthanu is all set to see the light in his acting career as he got committed play along with his idol in his next. Tentatively titled as Thalapathy 64, the film reportedly has Shanthanu as one of the antagonist. Shanthanu is one of the very few celebrities who are very much interactive with his followers in social media platforms, especially in Twitter.

The son of actors K. Bhagyaraj and Poornima Bhagyaraj, Shanthanu appeared as a child artist in his father’s Vettiya Madichu Kattu, before making his debut as a lead actor in the romantic comedy Sakkarakatti. Yesterday, a twitter handle mentioned the actor and asked him whether he missed the opportunities to act in few blockbuster films due to his father.

The post shared by the twitter user said that Shanthanu missed to do the lead role in Shankar’s 2003 “Boys” due to the intervene of his father Bhagyaraj. Further the post said that Shanthanu was also offered to do Bharath’s role in 2004 Romantic Drama “Kaadhal”. But Bhagyaraj denied it as the plot contained too much of tragedy according to the post.

Then the post said that Bhagyaraj didn’t let Shanthanu to do the role he was offered in 2007 blockbuster “Subramanyapuram”. Sasikumar tried to rope in the “Sakkarakatti” actor for the role played by actor Jai, according to the post. The post even added that several other filmmakers were ready to do film with Shanthanu.

On seeing this post, Shanthanu who is busy in the shooting of Thalapathy 64, took time to reply in order to clear the air. In his reply tweet Shanthanu said that the names of the films are true but the reasons stated in it were absolutely false. He even expressed his disappointment on the person who spread such news without knowing the actual information.

Apart from Thalapathy 64, Shanthanu also committed in few more projects. On the profession front, Shanthanu, who was last seen in Mupparimanam , has recently signed his next with Madha Yaanai Koottam director, Vikram Sugumaran. Titled as Raavana Kottam, the film was shot in a village near Ramnad lately. “It’s a new backdrop for me. The producer and director opted for me because they wanted a ‘namma ooru paiyan’,” said the actor regarding Raavana Kottam.

How it would be if Shanthanu acted in the above mentioned movies ?? Comment your views below !!

Actor Sathish's comment on the attire donned by budding actress Dharsha Gupta at an event that conducted for the upcoming film "Oh My Ghost"...