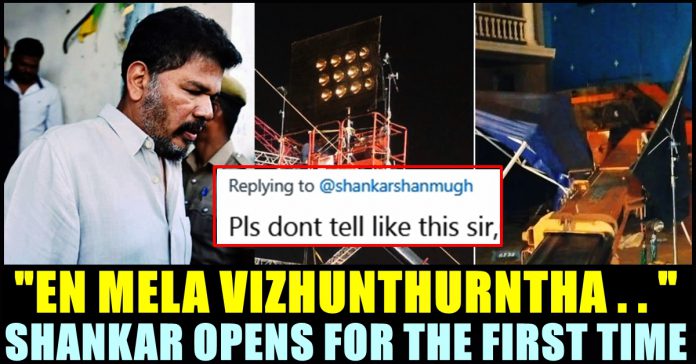 Director Shankar registered his first ever statement on the tragic accident that took place on the sets of Indian 2 days ago. The heart breaking news of the demise of three hard working technicians of Indian 2 shook the entire Tamil film industry. An aspiring film director named as Krishna, An aspiring art director Chandran and a personal assistant of Director Shankar Madhu died on the spot as soon as a light set-up on top of a crane fell on the crew who were at the spot. The rope that was used to hold up the set-up gave way, according to reports. Along with three technicians who were killed, as many as 10 people got badly injured.

Many celebrities and fans expressed their condolences to the families of the technicians. Kamal Haasan and Kajal Agarwal who were present at the spot shared about the trauma they went through on that night. Sharing this news, Lyca Productions which is producing the sequel of 1996 blockbuster, expressed its condolences through their official social media account.

Latest report said that Kamal Haasan had written a letter to Lyca production to ensure the safety of cast and crew. He said that this will “restore the confidence of the cast and crew (including me) to report back for the shoot.” He has also written that he would want to know what kind of insurance the production house has taken.

The actor wrote, “Any loss, cost damage, risk undergone on account of the production team failing to carry out what they ought to have carried out has to be compensated in full and at the earliest.” Kamal Haasan also stated that the production house should provide best medical help to those who were injured in the accident and provide financial and emotional support to the families who were affected.

Now director Shankar who is considered as one of the best director in Indian cinema has expressed his emotions for the first time, since the accident. The director said that he was missed by the crane by a whisker and said that the crane could have fallen on him instead of falling on his co-workers.

“It is with utmost grief, I’m tweeting.Since the tragic incident,I’ve been in a state of shock & having sleepless nights on the loss of my AD & crew.Having missed the crane by a whisker,I feel it would’ve been better if it was on me. Heartfelt condolences & prayers to the families” his tweet read.

It is with utmost grief, I’m tweeting.Since the tragic incident,I’ve been in a state of shock & having sleepless nights on the loss of my AD & crew.Having missed the crane by a whisker,I feel it would’ve been better if it was on me. Heartfelt condolences & prayers to the families

Many of his followers consoled the filmmaker and asked him not to post tweet in that way. After paying the last respects to the deceased, Kamal Haasan and the CEO of Lyca productions announced about their financial help to the family of the deceased and for the injured.

Team India, one of the favourites to win the world cup 2019, lost to New Zealand and got eliminated from the tournament. Millions of...

BREAKING : Gowsalya’s Explanation To The Allegations Against Sakthi !! Check Out !!

Comedy actor Yogi Babu who predominantly appears in Tamil films, on Wednesday evening, came up with a post in his official twitter handle, clearing...