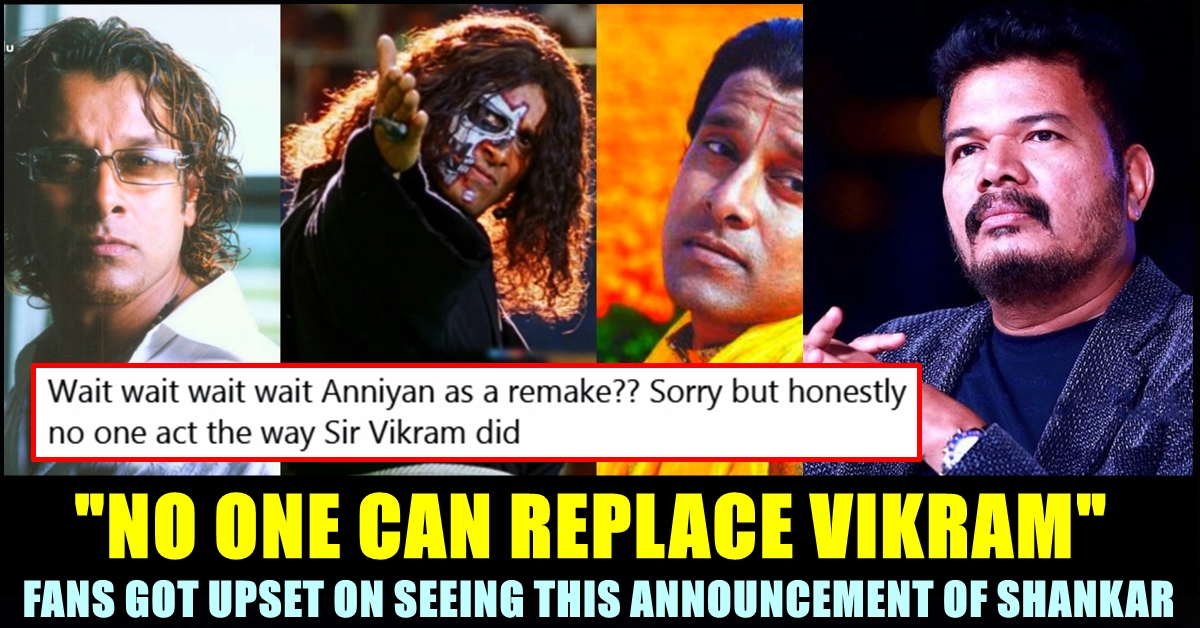 Director Shankar officially announced about his next project with Bollywood actor Ranveer Singh and fans couldn’t resist themselves from commenting about Indian 2 and the performance delivered by Vikram in the original. They are also expressing their disappointment about the alleged line up Shankar is heading towards and wants him to make quality films like he did in the early stage of his career instead of concentrating in sequels and remakes.

On Wednesday, the filmmaker came up with a tweet saying that he feels extremely happy to announce about his next project which is a remake of “Anniyan”. “In this moment, no one will be happier than me, bringing back the larger than life cinematic experience with Ranveer Singh in the official adaptation of cult blockbuster Anniyan.” the filmmaker’s tweet read.

Anniyan was released in 2005 had actor Vikram and Sadha in the lead roles. The film marked Kollywood’s first film based on multiple personality disorder, followed by several films in Hollywood. Vikram proved his versatility through this film in which he was required to portray three roles Anniyan, Ambi and Remo. The film was made of an expensive budget at its time and became South India’s most expensive film ever made.

The story of the film revolves around a law abiding citizen Ambi who is displeased with the corruption filled society, develops two other identities to fulfill his requirements without his knowledge. Anniyan, a man who kills people who are not obeying the law and Remo, a fashion model who makes Ambi’s love interest to fall in love with him. Actors Nedumudi Venu, Vivek, Prakash Raj, and Nassar played important roles in the film.

Now, on seeing this announcement about the film’s remake, various kind of reactions kept surfacing in the Internet. A number of fans asked him to complete the sequel of Indian before starting his next project whereas many others said that no one can replace Vikram in “Anniyan”. “Love Shankar as a director and presenter, but what’s with this new stream of continuous sequels and adaptations. That much a dearth of writers in the industry? Missing Sujatha all the more now.” wrote film journalist Siddharth Srinivas.

Shankar and his obsession with sequels/remakes 😬😬

Shankar announces a new movie with Ranveer Singh while Indian 2 is still on the floors and there's another movie lined up with Ram Charan.

Something is not adding up 🤔.

Love Shankar as a director and presenter, but what's with this new stream of continuous sequels and adaptations. That much a dearth of writers in the industry? Missing Sujatha all the more now.

There is no need for this cult classic. don't spoil the original sir. Wasted !!

No one can act like Vikram.. It's a masterpiece from Vikram

What Vikram did on screen in a contrived plot like Anniyan, Ranveer can only dream about it. I am sure he will caricature the character and give another overacting performance! Shankar sir is just going down the spiral ladder with Robot 2.0 and now this.. don't touch classics sir

Comment your views on this announcement of Shankar and the reactions he is receiving !!