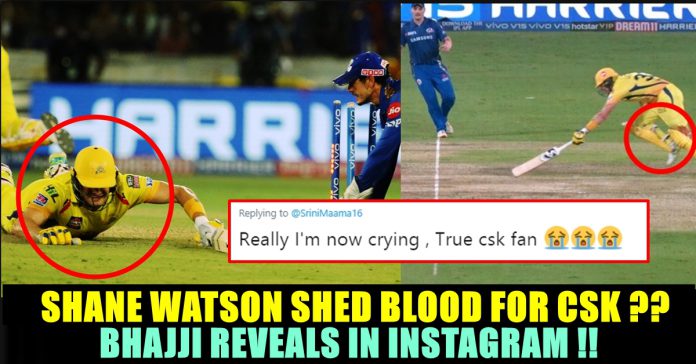 In the end, Mumbai Indians ended up edging the final by just one run, but they made it a lot tougher for themselves by missing several opportunities to dismiss the one batsman who stood between them and victory. Shane Watson was the beneficiary of as many as four missed chances before he was finally run-out for 80. Mumbai Indians were lucky that those misses didn’t cost them the title. The game went right down to the wire with Super kings needing 9 runs from the last over. With Shane Watson at the crease batting on 76 and Ravindra Jadeja giving him company, the Super Kings looked favourites to win the game. For Mumbai, the responsibility was on Lasith Malinga to defend the 8 runs and the veteran delivered. The first three balls went for four runs before Shane Watson was run out while trying to take a double. Shardul Thkaur then dispatched a full-toss for a double before being trapped in front of the wicket with his team needing 2 runs from the final ball.

Nearly after 24 hours of time, it is came to the public attention that Shane Watson who played the fighting knock for CSK played with bloodied knee. Yes, you read it right. Harbhajan Singh who excelled in the yellow jersey throughout the tournament revealed this through his Instagram story. It is reported by Bhajji that Shane batted with the injury and got 6 stitches after the match. It was the left knee of the veteran which got hurt while trying to save himself from run out earlier in the game. The pictures of him struggling with bleeding knee doing rounds in social media.

As soon as Bhajji posted this story it went viral in social media and the fans of the Tamilnadu team got emotional. Check out them here :

Shane Watson batted with the bleeding knee in the Finals and scored 80 runs. What a champion player 🙏🏻

Honestly id never liked Bhajji and Watson before they played for Csk. Now at end of the two seasons i realised I have been looking fwd to see them playing subconsciously. Thanks for the memories @ShaneRWatson33 @harbhajan_singh Love a die Csk Fan.

The absolute unflinching commitment @ShaneRWatson33 salute you for your dedication! Much love ❤️

Shane Watson batted with the bleeding knee even without telling anyone and almost won the game for CSK in finals. He got six stitches after the game.

Sums up the dedication! 💛 pic.twitter.com/gt1sWf02Yk

Watson was debuted in 2002 in a One Day International and retired in 2016[2] as world No. 1 T20I all-rounder. He was the last player to retire from Australia’s golden era of the early 2000s.

Watson holds several records in T20Is, ODIs and T20s. According to Forbes, Watson was the highest-paid non-Indian cricketer in the world for five consecutive years, 2011 to 2015.

Previous article“Are You Seeing Someone ??”, Fan Tried To Flirt With Jemimah !! Received A Fitting Reply From Her !!
Next articleGayathri Raguramm Remembers What Kamal Said To Her In BIGG BOSS Show !! Check What !!