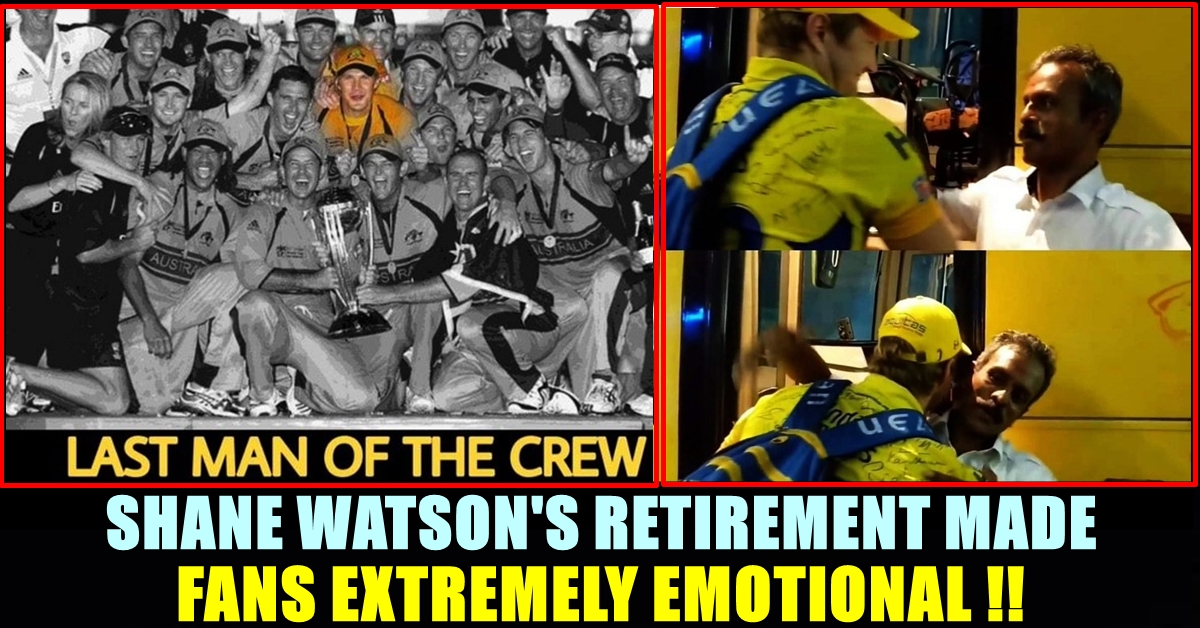 Shane Watson of Chennai Super Kings announced his retirement from the Indian Premier League. As soon as the news surfaced, fans of IPL became emotional and posting messages to express their love towards the Aggressive all rounder. In the 11 matches he played, Watson scored 299 runs for CSK with an average of 29.

Reports suggests that Watson informed about his retirement to his CSK teammates and Badri nath, former player of the yellow team posted a tweet regarding the same. “Needless to say a champion cricketer in every right ,but also one of the nicest I have met , congratulations on an awesome career ,Thank you Watto” his tweet read.

Needless to say a champion cricketer in every right ,but also one of the nicest I have met , congratulations on an awesome career ,Thank you Watto 🙌🏼👍🏼 #IPL2020 pic.twitter.com/qSImzV6m3d

Watson, the former Australian all rounder, acted as a big match player for the CSK team. His century in the finals of 2018 IPL helped the team to clinch the trophy. He also played terrific knock in the finals of 2019 IPL in which CSK lost by just 1 run. He won the IPL trophy two times, one with CSK and another one with Rajasthan Royals. The innings he played for CSK with his bleeding knee in the finals of 2019 made fans of CSK to connect with him emotionally.

“Watson was very emotional when he told the CSK dressing room after the last game that he would retire. He said that it was a great privilege for him to play for the franchise,” said a source close to the team, according to reports. It is notable that CSK captain Dhoni, in the post match presentation of the final match, said that he and the management would look for a change in core of the team. With 23 year old youngster Ruturaj Gaikwad scoring three back to back half centuries, Watson made this announcement.

A hashtag saying “Thank you Watson” is trending in Twitter with messages filled with love and affection towards the cricketer.

"A bit of blood was not going to stop me " – This will be etched on our hearts forever. 💛#ThankYouWatson 💛🦁 pic.twitter.com/dJYLWiH7Tz

Something about CSK and Australian openers. The three trophies we won, there were 3 diff Aus openers. Always connected well with the franchise and became successful. Haydos, Hussey and finally Watson. #ThankyouWatson pic.twitter.com/K3YKqgQ8I2

He is a great cricketer and also he is a great human being ❤️#ShaneWatson#ThankYouWatson pic.twitter.com/SQOTOLc1s8

Shane Watson retires from all forms of Cricket
Thank You @ShaneRWatson33 for all memories ❤️#ThankYouWatson #MSDhoni pic.twitter.com/1gLvildK7S

Watson Retires from all Forms of Cricket.
Thank You for all the Memories

Let us thank Watson one last time for all the memories he gave us by being in the cricket field and wish him all the best for his future !!