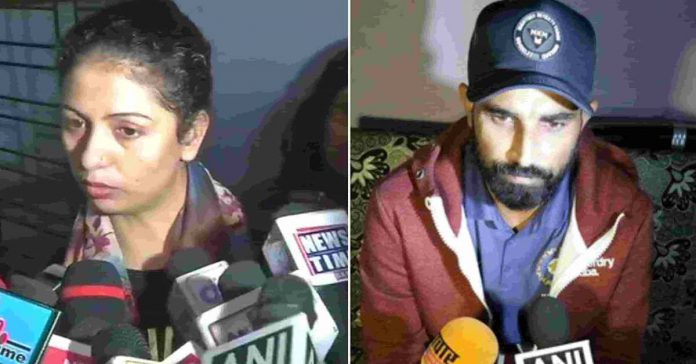 Shami’s Wife Again Comes Up With a New Allegation : Says That He Tried To Kill Her By Giving Sleeping Pills.

Indian cricket team’s speedster Mohammad Shami was accused by his wife for having extra marital affairs. Hasin Jahan, wife of Mohammad Shami keep on producing proofs of him betraying her by having affair with multiple women. She complained on him saying that he is abusing her both physically and mentally.

Day by day she is coming on with various accusations and proofs of Shami doing domestic violence. Regarding this BCCI has withhold his yearly contract of playing for Indian cricket team and as he is contracted to play for Delhi Dare devils in upcoming IPL tournament , there is no clarity of him playing in the tournament as well. Though Shami rejected all the claims and said everything is false, Hasin Jahan was in front of media with all the proofs. Mohammed Shami’s wife Hasin Jahan went to the court on Friday. Earlier, she met Kolkata Police to file an FIR against the Indian cricket team pacer. Probably for the first time the wife of a high-profile Indian cricketer took to social media to reveal her husband’s apparent misdemeanours. Snapshots of conversations with several women were posted in Hasin’s Facebook page on Tuesday. The account has now been deleted. Shami’s wife has now lodged an official complaint with Kolkata Police. She then filed a complaint on him stating that he once tried to send her to his brother’s room. After revealing that the Indian cricket team pace bowler has attempted suicide in the past, Jahan made another shocking claim suggesting Shami once forced her into a room with his brother, who then tried to touch her inappropriately. The incident, as per the claims of Jahan, took place in December last year. She also added that Shami wanted her to have physical relationship with his brother and told him to bury her body in the jungle after killing her. She said  “I’ve done everything he wanted me to do. He has tortured me & hasn’t treated me like his wife. He’s a big flirt. I’m not going to divorce him till my last breath. I’ve all the evidences & will soon drag him to the court.” to the media.

And now Hasin Jahan filed a written complaint at Kolkata Jadavpur police station in which Shami is not mentioned alone but Hasin Jahan dragged his whole family which consist of 4 members in this issue which says that they tried to kill her by feeding sleeping pills. FIR has been filed against Mohammad Shami on several cases such as cruelty to a woman by a man and his relatives which falls under the code 498-A, voluntarily causing hurt- section 323, rape-Section 376, criminal intimidation- Section 506 and also under Section 328 and Section 34.

Joint commissioner of Police Praveen tripati, Kolkata said, “She complained that they gave her pills in the intention of killing her, Section 328 stands for if someone gives you drug in the intention of hurting you, Section 506 is for threatening and 34 is for if three or four people planning to do an offence with a common motive.”  “We are into collecting the evidence right now” he finished.

Previous articleMS Baskar’s Little Princess Has Set Serious Daughter Goals: A Must Watch Heart Melting Video Is Here
Next articleThe Man Who Made The Doctors False For More Than 50 Years Died.

Kaappaan which got released yesterday, is a story that revolves around Mohanlal and Suriya, who plays the roles of PM of India and first-rank...