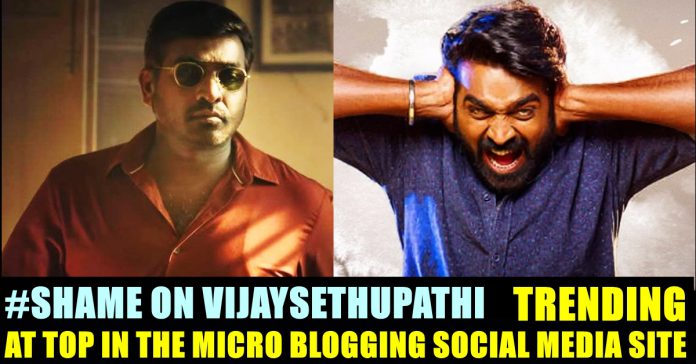 Followed by the motion poster release of legendary spin bowler Muttiah Muralitharan’s bio picture, a hashtag saying “Shame On Vijay sethupathi” is trending in the micro blogging social media site, slamming the actor for taking up the role. However, people who are supporting the actor’s choice, intervened into the hashtag and questioning those who are opposing him for representing Muralitharan in his biographical picture.

The motion poster of “800” released on youtube on Tuesday and is being viewed by the enormous number of Tamil cinema fans. The 76 seconds motion poster showed the glimpse of what are going to take place in the movie. It contained the struggles faced by the Tamil nadu based Muttiah Muralitharan in his childhood in an animated format. At the end of the poster, the makers surprised the audience by morphing the face of Vijay Sethupathi as Muttiah Muralitharan.

Watch the poster below :

According to reports, the project is going to be bankrolled by Movietrain motion pictures and Dar motion pictures.The motion poster shows Sam CS of Vikram Vedha, Kaithi fame as the composer. The film is titled as “800” in a way of referring the number of wickets taken by the spinner in his test match career. He is the highest wicket taker in the history of test match cricket. He also happens to be the first cricketer to reach 1000 wickets milestone in International cricket. Overall he took 1347 wickets in his cricketing career which spanned nearly 20 years and most importantly he is one of very few Tamil speaking foreign cricketers.

Muralitharan was born 17 April 1972 to a Hill Country Tamil Hindu family in Kandy, Sri Lanka. He married Madhimalar Ramamurthy, a Chennai native, on 21 March 2005. Madhimalar is the daughter of late Dr S. Ramamurthy of Malar Hospitals, and his wife Dr Nithya Ramamurthy. Muttiah Muralitharan holds Overseas Citizenship of India (OCI) and he does not need a visa for travelling to India. According to his manager, Kushil Gunasekera, Muralitharan qualifies for this status because his family originates from India. He announced his retirement in the year 2011, April 3.

Days earlier, As soon as Vijay Sethupathi announced about the biographical picture of Muttiah Muralitharan, a set of people stormed into his comment section and slamming him for accepting the project. Now, a sum of 43,000 plus tweet were posted under the hashtag “Shame On Vijaysethupathi” for accepting to do the role of Murali.

People are opposing Murali because the cricketer once said that he wants to identify himself as a Sri lankan first. “Only after that I am tamilian. I know tamil language well but Sri lanka is my birth place” the cricketer said.

The Sinhala Government has massacred two lakh Tamils ​​in Eelam. There is no other proof than this that #VijaySethupathi can not feel this pain! @VijaySethuOffl @RajapaksaNamal pic.twitter.com/ghpiV3FiOu

#ShameOnVijaySethupathi
Murali is a tamilan but he represent srilanka & Srilankan. We have lot of cricketing legends in our country then why making srilankan player biopic. pic.twitter.com/PwFzuYL6V3

This will be your last film bro …

However, a set of people posted tweets under the same hashtag supporting the actor. They said that Vijay Sethupathi is just an actor who wants to do different kind of roles. They wanted people to see the film just as an art. Check out some of such reactions below :

Come on promote this movie as much you can 🔥🔥…. He is a actor doing a role of cricketer …. War is for the governments not for people . This hashtag is moral less and injustice one . See an ART like an ART . Don't pretend like you are smart. pic.twitter.com/Ho5ixMBOUq

#ShameOnVijaySethupathi??
Why people are against Vijay sethupathi
"If Hollywood makes the film about Mahatma Gandhi, then why doesn't India make film about Murlidharan".
Atleast this time he need support#VijaySethupathi pic.twitter.com/xv45P8qyeh

Why shame on Vijay Sethupathi…..?
Is all Srilankans oppose tamilans..?

Why???Pls stop this…He is a good bowler…he has a intresting and inspiring past

Please Stop This
Although he married a tamil woman..

Comment your views on these two kind of reactions from the online users of Tamilnadu for “800” motion poster !!

Previous article“Dhoni’s Wicket Is My Dream” When Natti Made His Words Become True !! WATCH
Next articleSuperstar Rajinikanth Suffered An Embarrassment After Court Warned Him !!

Young Director Got Thrashed By Vijay Fans For His Old Tweet!!

8 year old tweet of young and emerging filmmaker Pradeep Ranganathan who degraded actor Vijay in one of his tweets, is going viral in...

Julie Hits Back At The Abusers In Social Media !! “Am I Not Your Sister ??” She Asks In Anger !!