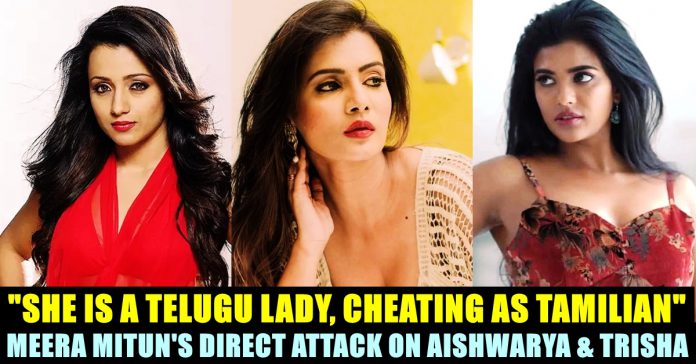 After accusing n number of people for various reasons, Meera Mitun now came up with a series of tweets targeting actress Aishwarya Rajesh. The Bigg Boss star has alleged that the actress is a product of Nepotism and she is copying her fashion style to look pretty. She also said that Aishwarya Rajesh is cheating Yamil people by pretending as a Tamil nadu based girl. The actress tagged the official twitter account of Trisha and slammed her for copying her style as well.

Meera Mitun rose to fame among Tamil TV audience through her Bigg Boss stint. If you are aware of Bigg Boss show’s third season in Tamil, you must have known about Meera Mithun , a controversial participant of it. One of the highly controversial episode of the season is undoubtedly the one in which Meera Mithun accused Director Cheran of physical harassment.

Meera Mitun posted a picture of herself in her twitter account and wrote “She is clothed in strength and dignity” as her caption. In this post of her, a an account named as Kaul the King said that the class of Meera Mitun in the picture, could not be replicated by copy cats Trisha and Aishwarya Rajesh.

Replying to the tweet, Meera tagged Trisha and Aishwarya Rajesh by terming them as Shameless creatures.

Followed by this, in her next tweet, Meera said that Aishwarya Rajesh is copying her style in all her pictures.

Yes copycats plenty in kollywood , they lack originality… It's not jus this recent pic , all her pics are pure Xerox copy of mine. Shameless @aishu_dil https://t.co/Ui0VLNFPFY

In her next tweet, she directly attacked Aishwarya Rajesh and asked her to be on her own.

Copy cat @aishu_dil be on ur own dont copy me and try to grab mainstream roles 🤭 https://t.co/gzJLsBYSrj

Further, she accused Aishwarya Rajesh as a Nepotism product and said that she is cheating everyone as a Tamilian. “She acting as a normal next door woman creating sympathy that she came through hardwork and struggle cheating all tamilians, well the fact she s a #Nepotism product ! Whatta new technique to cheat !” she wrote in one of her tweets.

Yes she s telugu lady cheating everyone as tamilian, also acting as a normal next door woman creating sympathy that she came through hardwork and struggle cheating all tamilians, well the fact she s a #Nepotism product !
Whatta new technique to cheat ! @aishu_dil https://t.co/Nj1FycbilP

Followed by her Bigg Boss stint, the actress involved in many controversies and several audio conversations of herself with her accomplices leaked. She was removed from movies like Namma Veetu Pillai, Agni Siragugal for various reasons. Meera claimed that Kamal Haasan used his influence to feature his daughter in “Agni Siragugal” in the role she was supposed to do.