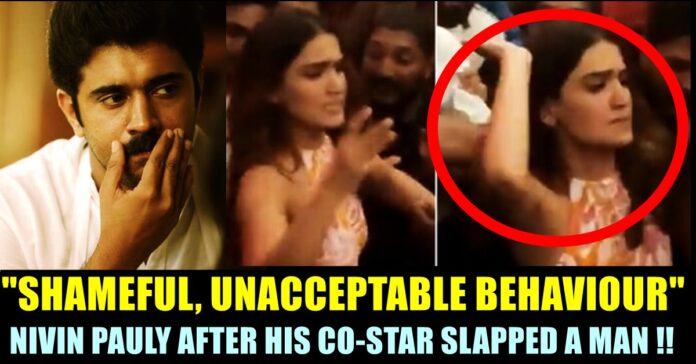 Actor Nivin Pauly reacted to the issue where his co-stars from “Saturday night” movie got harassed by an unknown individual in a mall. The film crew went to promote their upcoming movie and the horrific act of groping took place against the two actresses Saniya Iyappan and Grace Antony. Sharing the post, actor Nivin Pauly, supporting his co-stars said that it is a shameful and unacceptable behaviour that shouldn’t have happened.

Days ago, Malayalam actresses Grace Antony and Saniya Iyappan were molested and sexually harassed in public while they were touring Kerala to promote their upcoming film “Saturday night”. The incident came to light after a video of one of the actresses slapping a fan in the crowd went in viral in social media platforms. The actresses came up with clarifications in their respective social media handles.

On Tuesday, the two actresses went to Hilite mall located in Kozhikode to promote their upcoming film. While they were leaving the venue, the crowd became unruly thus creating a stampede-like situation. While the actresses were being escorted through the crowd, they reportedly got molested by unknown persons.

In a video which went viral, Saniya Iyappan was seen slapping a guy after she witnessed him misbehaving with them. Soon after the video wen viral, both the actresses addressed it in their social media handles.

“So l and my movie team were promoting our new movie” Saturday night ” at a mall in Calicut. The promotion events went well across all the places in Calicut and thanks to the love from the people of Calicut .The event at the mall was extremely packed with people and the security was struggling to handle and maintain the crowd” Saniya Iyappan said in her post.

“After the event, I and one of my costar were leaving and some guy misbehaved with my colleague, and she didn’t even get a chance to see or react because of the rush and the crowd. After that, I also encountered a similar act of misogyny and I reacted to it in shock as you’ve watched in the video. So I wish no one has to face this kind of unwanted trauma in their life, for violence against women there will be consequences and actions against these misogynistic individuals” she added.

“I had a chilling experience while promoting my new movie at Kozhikode, Hilite Mall. It is a place that I love. But while we were returning after the program, a person who was standing in the crowd grabbed me” Grace Antony said in her post.

Reacting to the issue, actor Nivin Pauly who is known for appearing in films such as “Premam”, “Action Hero Biju”, “Bangalore days”, issued a post saying “Shameful, unacceptable behaviour that should never have happened…”

ate on Friday evening, MS Dhoni's fans were given a rude shock as Board of Control for Cricket in India's (BCCI) acting secretary Amitabh...

A Follower of "Cooku with Comali" show named Arunkumar Arivukalanjiyam, came up with a post in his Facebook handle, reacting to the trolls that...