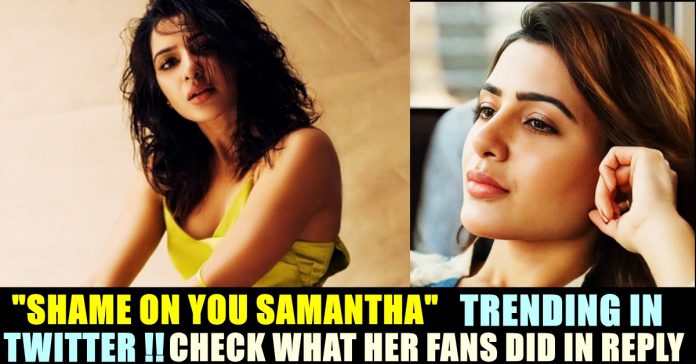 Ahead of the release of Bollywood web series “The Family Man 2 “, hashtag saying “Shame on you Samantha” is trending in the micro blogging social media site. As a result, a hashtag to support the Tamil nadu based South Indian actress is also trending. Many of her fans are trending “We Support Samantha” hashtag with posts defending the actress for playing the role in the web series.

The series is scheduled to release in Amazon Prime Video from Thursday. Despite of the appreciations that surfaced for the actress’s performance in the trailer of “Family man 2”, a set of people started expressing their disappointment over the “Kaththi” actress for taking up a role of an extremist from Tamil roots. Hashtags such as “Family Man 2 Against Tamilians” were trended in twitter as soon as the trailer was released.

Throughout the trailer of the “Family man 2”, we could see Samantha wearing the uniform of the Liberation Tigers of Tamil Eelam (LTTE). The dialogues also suggests that there is a hostage situation in Chennai. It has been reported that most part of the website is taking place in Chennai. LTTE also known as Tamil tigers is an organisation that attempted to establish an independent state for Tamils named “Eelam” in Sri lanka.

Now, as the release nearing, a hashtag saying “Shame on you Samantha” trended in Twitter on Wednesday. Check out some of the tweets under the hashtag below :

@Samanthaprabhu2 if you want money there are lots of films and stories are available #familymanseason2 is making angry for tamilcommudity #ShameonYouSamantha hope now you don't need U/A certified films, because less money

In reply, fans of the actress started trending “We Support Samantha” hashtag in the same platform to extend their support to her. Check out some of the reactions under the hashtag below :

She is always in her cool mood
How rare and beautiful you are 😘❤ @Samanthaprabhu2#WeLoveSamantha#WeSupportSamantha pic.twitter.com/vu6NeMkCKk

She is a special kind of woman ❤️ she is the one who will inspire you , motivate you and challenge you to become a better person in every aspect of life💯 @Samanthaprabhu2 #WeSupportSamantha #WeLoveSamantha pic.twitter.com/Xorp1HyEdP

Previous articleThis Young & Emerging Actor To Play Ashwin In His Biopic ??
Next articleSanam Shetty Confronted Balaji Murugadoss For His Statement Against Behindwoods !!

American Brand Made Lungis & The Price They Fixed For Per Piece Shocked Indians !!

"Lungi" is one of the widely used, most famous, comfortable attire of men in Asian countries, especially in India. The piece of cloth is...