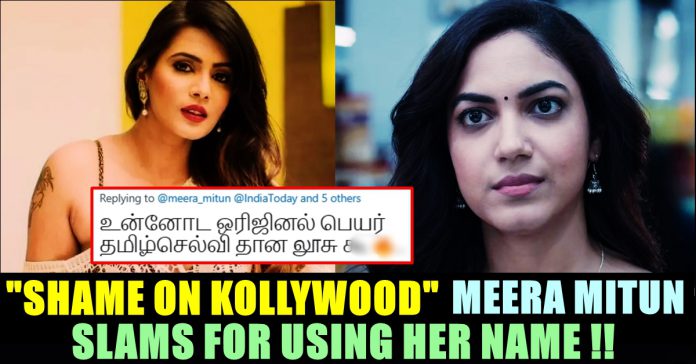 “Shame On Kollywood” Slams Meera Mitun For This Reason !!

The controversial Meera Mitun once again came up with an accusation against Kollywood saying that they are using her name for female characters to gain mileage for their film. Originally named as “Tamizh Selvi”, Meera Mitun rose to fame among Tamil audience through Vijay Tv’s reality game show Bigg Boss which was hosted by Ulaganayagan Kamal Haasan.

Was in for a surprise, met @nivinpaulyactor on the trip. Great actor and a nice person.

Meera Mitun earlier accused Kollywood after getting removed from movies like Namma Veetu Pillai, Agni Siragugal for various reasons. Through one of her tweet she alleged that Kamal Haasan used his influence to replace his daughter Akshara Haasan to act in the role which was supposed to be played by her in “Agni Siragugal”. Recently she said that Master movie’s second look was copied from her pose. (Also Read : “Master” Vijay Copied Meera Mitun ??)

Now, in a tweet, Meera said that Kollywood is a worst industry. She said all the recently released films are having its heroine’s name as “Meera”. “Shameless Kollywood. Worst Industry lol. I see all the recent release movies has the heroine name as “Meera”…. Male chauvinistic Kollywood you need my name for movies to run” her tweet read.

This tweet from Meera Mitun surfaced in her timeline, a day after “Kannum Kannum Kollayadithaal” released in online streaming platform Netflix. The film which became a blockbuster for its engaging content, has heroine Ritu Varma in three different getups. During the first half, Ritu’s would introduce herself as “Meera” to Dulquer Salman. Twitter users who are aware of this fact, started trolling Meera Mitun for her baseless accusation against Kollywood. Few people even reminded Meera Mitun about her original name “Tamizh Selvi”

Followed by her Bigg Boss stint, the actress involved in many controversies and several audio conversations of herself with her accomplices leaked. In one of her interview, Meera Mitun even alleged that the boys who participated in Bigg Boss show loved her. (Also Read : Lady Superstar Nayanthara Copied Meera Mitun ??)

Comment your views on this accusation of Meera Mitun against Kollywood !!

Superstar Rajinikanth found himself in big trouble after his speech in the 50th year celebration of "Thuglak" magazine. After his remark on E.Ve.Ra Periyar...