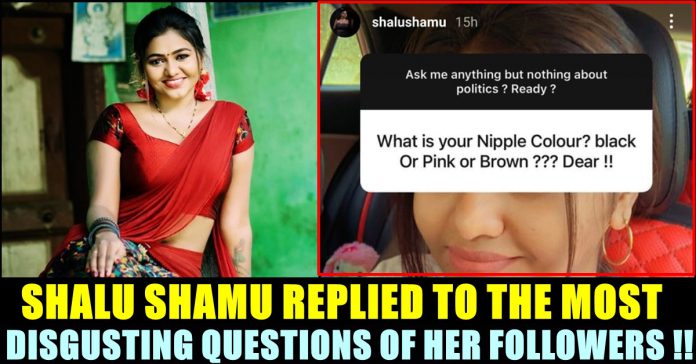 Actress Shalu Shamu who is known for appearing in Tamil films as a supporting artists, recently conducted a question and answer session with her followers. She who is pretty much interactive with her followers, never shied away to give fitting replies to the trollers and abusers in online medium. She even shared about a filmmaker’s inappropriate behaviour towards her while interacting with her Instagram followers. Now, in the recent chat session, she gave back to a number of people who asked obscene questions to her.

She also talked about her marriage, first salary, work experience and many other aspects of her life. Shalu Shamu is an actress who appeared in Varutha Padatha Vaalibar Sangam movie as heroine’s friend, was Mr.Local in a small role. She is currently enjoying 5 lakh plus followers for her official Instagram account and has been engaging her followers by uploading pictures from her photo shoots.

On Wednesday, Shalu gave her followers a chance to ask about anything to her except politics. Among the many who questioned, a follower wanted the actress to tell the size of her bo*bs. To make him shut down once and for all, Shalu replied to him saying “Definitely bigger than you _|_”

Another one had the courage to question the actress about her other private part. Without a second thought, Shalu replied to him writing “same as your balls”

When one of them asked her to talk about “adjustments” in film industry, she said “Everybody has their own way of taking decisions, nobody can force someone’s decision”

Check out some of the other answers she provided to her followers :

The messages being sent by youths to the female personalities who are associated with cinema industry are not tolerable these days, especially since the lockdown was implemented to prevent the spread of the virus. Though there are many users are following their favourite celebrities to express their love on them, some miscreants are running social media accounts only to abuse people who are widely known are celebrated among people.

Knowing that there are no severe laws created yet to put them behind the bars for making a comment in social media, people, mostly men who owns a smartphone are sending such abusive texts to whomsoever they want without giving a thought about the consequences. It is high time for such people to think twice before letting their words out in social media as it would become public sooner than they think.

Previous articleBJP Kalyan Wants No Woman To Become Priest Because Of This Reason !!
Next articleJUST IN : Police Arrested Toxic Madan’s Wife !!

Australian cricket legend Shane Warne's demise left the entire cricket fraternity in utter shock. The 52 year old was died due to a suspected...