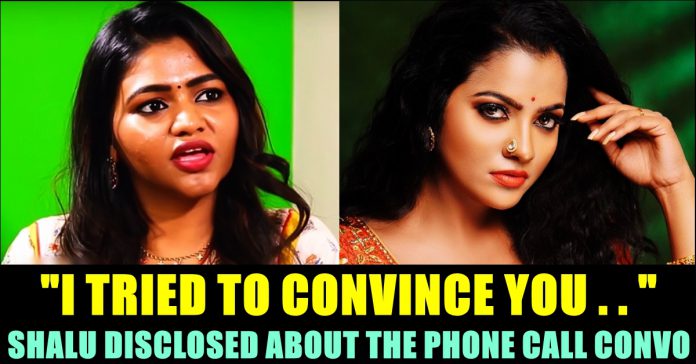 Chithra was seen very much enthusiastic hours before her demise according to her colleagues which left the public to speculate mysterious possibilities. The “Pandiyan Stores” actress was in EVP film city on the wee hours of Wednesday to complete her part in the shooting for Vijay Music.

Chithra also shared pictures and videos in her official Instagram account where she enjoyed 15 lakh plus followers, hours before her death. While many people who belong to Television industry offered their condolences to the family members of the deceased, a number of colleagues disclosed about the details of Chithra’s final moments as well.

Actress Shalu Shamu who is known for appearing in “Varuthapadatha Valibar Sangam”, “Mr. Local” as a supporting actress, uploaded a story in her official Instagram account, sending a message to Chithra. She opened about a phone call conversation she had with Chithra before her death while writing the story to her 4 lakh followers and others.

Mentioning the official twitter account of Chithra, Shalu said that she never thought of loosing her friend this way. Through the message she shared, Shalu opened on how she tried to convince Chithra about something related to her life partner.

“I never thought I’ll loose u this way babe, when I spoke to you lastly I tried every second of the call to convince you for not taking a bad decision of ur life partner but u were not ready to accept. If I known if this would have happen, I never would’ve stop trying at the first place. Our heartbroken the second we lost U Chithu. RIP!” read the story shared by Shalu Shamu.

Sivangi of “Cooku with Comali” fame posted a story saying that she was happily singing and dancing with the former video jockey yesterday. “Akka we were dancing and singing together happily yesterday. It is not even 24 hours and you are gone. why did you do this. Rest in peace Chithu akka” she said in her story.

Vanitha Vijayakumar who is currently collaborating with Vijay Television through “Kalakka Povathu Yaaru” show, posted a couple of tweets confirming that there is something looks fishy about Chithra’s demise. “She was shooting for star music last night ..neighbouring set to kpy in evp where I was shooting last night same time 230 am we left …she drove to her hotel and killed herself???soo wrong…noooo doesnt feel right …very disturbing and she is so alive in my eyes…what a shame” her tweet read.

She was shooting for star music last night ..neighbouring set to kpy in evp where I was shooting last night same time 230 am we left …she drove to her hotel and killed herself???soo wrong…noooo doesnt feel right …very disturbing and she is so alive in my eyes…what a shame

After finding her body in the star hotel she was staying with her fiance Hemnath, Chithra was admitted in a nearby government hospital where she was declared dead by the doctors. Later, her body was sent to Kilpauk government hospital for post mortem. The report of Thanthi suggests that Chithra and Hemnath were involved in an argument last night.

In the preliminary investigation, it has been reported that the cause of Chithra’s death was suicide as the bathroom door was locked from inside. However, the results of post mortem is awaited.

Tamil nadu chief minister and co-coordinator of AI ADMK Edappadi K Pazhaniswamy is busy campaigning for his political party across the state for the...

Successful Indian team who are in the second place are taking on Sri Lanka in their last league game in this ongoing world cup...