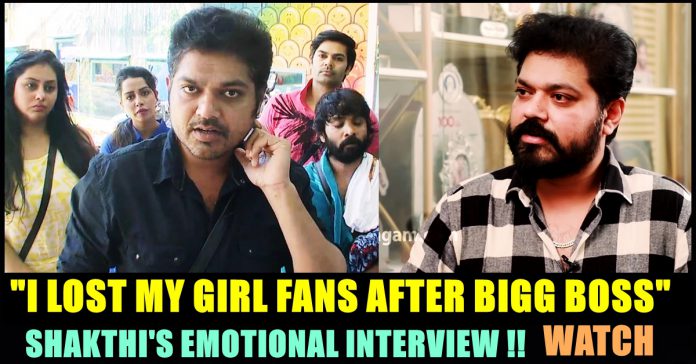 Actor Sakthi who debuted to Tamil film industry through a film named “Thottaal Poo Malarum”, participated in a youtube interaction recently and expressed his regret over contesting in the inaugural season of Bigg Boss show, hosted by Ulaganayagan Kamal Haasan. The actor also opened about the films he missed in his career so far and talked about how hard it is for a celebrity’s son to get success in Tamil film industry.

“I have missed 12 films during the starting stage of my career and 8 of them went to other heroes and became a massive hit as well” said Shakthi in the interaction. Being the son of legendary director P.Vasu, Shakthi began his career as a child artist in his father’s films before making his comeback in the lead role in Thottal Poo malarum. The song “Mugathai Eppothum” gained him face recognition but the actor failed to make a significant mark in the industry after that, despite of acting in a number of films.

“I have made so many mistakes due to my immaturity and lack of exposure. I don’t want to blame anyone” Shakthi says in the recent interview. “I stopped asking questions in shooting spots as people started talking behind my back, saying that I am being arrogant due to to my father’s influence” he added. “Kalavani, Aayiram VIlakku, Thambikottai, Nenjirukkum Varai are some of the films I rejected in the past” he revealed.

“Bigg Boss affected me in a huge way and I see it as one of my hurdles. Due to that show, I started facing a lot of personal problems. I regretted entering Bigg Boss house very later. I went inside in a pressure. They said so many celebrities are entering the house and I was blank as it was the first season of the show. After entering, I realized that I was the only hero in the house and Oviyaa was the only heroine. They portrayed me as a bad person and she became good. No problem, I don’t bother about it now” Shakthi said.

“After coming out of Bigg Boss house, I lost 50% of girls audience. Before that, femae audience would approach me calling “Shakthi sir”. After my Bigg Boss stint, girls started behaving like Oviyaa to me. Many looked at me like how Oviya do and they lived as “Oviyaa”. I wouldn’t bother them as it shows their maturity level” the actor said in the interview.

Shakthi said that he started moulding himself by working out and staying positive to gain projects. He said that he admires Vijay Sethupathi a lot and wants to do versatile roles like him.

Previous articleFollower Blamed Yashika For Her Friend’s Demise !! Actress Responded
Next articleYashika Replied To People Who Accused Her Of Consuming Alcohol While Driving !!