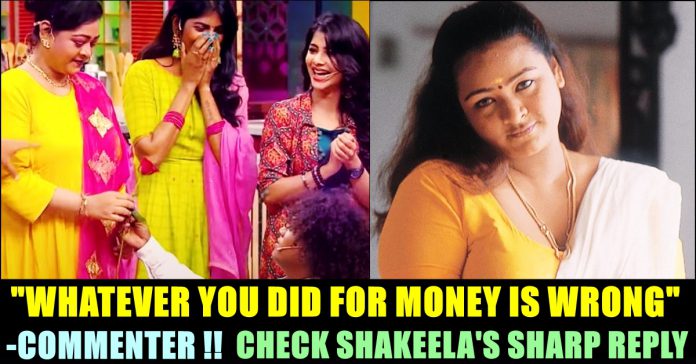 Shakeela’s Sharp Reply To A Commenter Who Criticized Her Choices !!

Popular actress Shakeela who is currently basking in the success of the reality cookery show “Cooku with Comali” appeared in an interaction with her co-participant VJ Parvathy and replied to people who criticized her choice of acting in adult films during the initial stages of her career. To the one who commented “Whatever you did for money is wrong”, the actress replied questioning what’s his problem in it.

Actress Shakeela who is popularly known for her adult films, has appeared in a number of Tamil films. Shakeela’s some of the mainstream films that got recognitions are Vijay’s “Azhagiya Tamizh Magan”, Jiiva’s “Siva Manasula Sakthi” Jayam Ravi’s “Jayam”, Arya’s “Boss Engira Baskaran” etc. In 2002, Shakeela announced that she will no longer act in B grade movies and released her autobiography in 2018.

The actress is currently taking part in the ongoing season of “Cooku With Comali” as one of the contestants. As the became a huge hit last year, the makers of it have started the second season and opted Shakeela as a contestant. The actress is doing exceptionally well in the cookery show and is likely to win the title as well.

Now, the actress had appeared in an interaction with her “Cooku with Comali” co-contestant VJ Parvathy. The duo talked about various topics including the actress’s career, growth, fall, positives and negatives. Shakeela revealed how film industry avoided her after announcing that she is not going to act in adult films in 2003. At one point, Parvathy read out a comment of a social media user who said that whatever Shakeela did for money is wrong. “You can justify whatever you want but whatever you did for money was wrong, you should have stopped” the social media user’s comment said.

Replying to him, the actress questioned “What is your problem ? Are you going to give me money ?” and added “I have to survive, I have a family to taken care of. Who would help me ? It is my body and I showed it with my willingness to feed somebody. Thank you”

The actress’s other answers to the controversial questions based on her community and family have won the hearts of the Internet users.

To a follower who asked why she is not trying to reduce her body weight, Shakeela effortlessly said that she is not going to bag heroine roles at this age and expressed her reluctance over reducing her weight through work outs. “I am 43 now, no one is going to cast me as a heroine. Why should I work hard and reduce weight now ? I am comfortable now and will continue to be the same” the actress said.

Previous articleAIADMK Allotted 20 Seats For BJP For The Upcoming Assembly Election !!
Next articlePugazh’s Reply To A Fan Of KPY Bala Won Hearts !!

Actress Abinaya who played a notable role in Vijay-Suriya starrer "Friends" appeared for an interaction with a private youtube channel and revealed that she...

Actor Sivakarthikeyan ventured into production with lyricist-turned-director Arunraja Kamaraj's debut directorial venture Kanaa. The film, which features Aishwarya Rajesh and Sathyaraj, was based on...

On Thursday, Kollywood filmmaker SP Jananathan who is known for directing significant films such as "Iyarkai", "Peranmai", "Porampokku" found unconscious at his residence and...

WATCH : 90s Kids Fumed After Seeing The Video Of A 61 Year Old Man Getting Married !!

Men who were born between 1990 and 1996 were found fuming at a marriage video which showed a 61 year old man getting married....