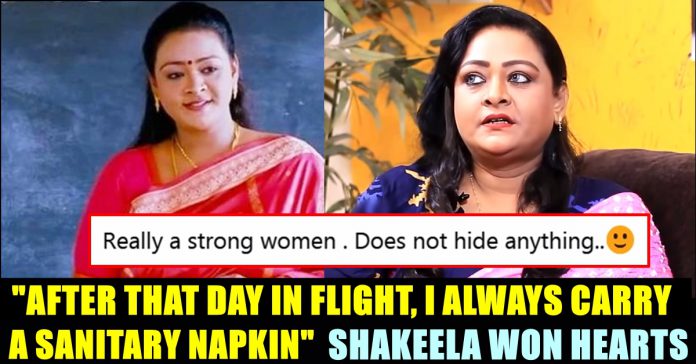 Actress Shakeela who is popularly known for her adult films has said that she would always carry a Sanitary Napkin in her handbag during an interaction with a you tube channel. The main reason she stated behind her act has won the heart of Internet users. The actress said that she is carrying it not only for herself but also for other women who are struggling to get the napkins amidst complicated situations.

The biographical picture of actress Shakeela who acted in 250 films throughout her career, is expected to hit the screens on Christmas day. Bollywood actress Richa Chadha is reprising the role of Shakeela in the movie. In a promotional event of the film, the 43 year old actress said that she feels happy on her biography being made when she is alive. “I don’t want to talk about myself. But I am happy that my Biopic has been made when I am alive” she said.

The actress is also taking part in the ongoing season of “Cooku With Comali” as a contestant. As the became a huge hit last year, the makers of it have started the second season and opted Shakeela as a contestant. The actress is doing exceptionally well in the cookery show and is likely to win the title as well. Now, in an interaction with a private youtube channel, Shakeela opened on why she is always carrying a sanitary napkin in her handbag.

Shakeela said that she unexpectedly had her menstrual cycle while travelling in a flight. “I asked the air hostess whether they are having a sanitary napkin. She said that they didn’t have it. I started searching for one in bathroom and also asked people who were present there. From that day, I wanted no women to struggle like me in front of me.” said Shakeela in the interaction.

“If I see someone feeling uncomfortable, I would ask her if she is having her menstrual cycle and would provide her one. That’s the reason I am carrying a sanitary napkin in my handbag” she said. Watch the video here :

Shakeela’s some of the mainstream films that got recognitions are Vijay’s “Azhagiya Tamizh Magan”, Jiiva’s “Siva Manasula Sakthi” Jayam Ravi’s “Jayam”, Arya’s “Boss Engira Baskaran” etc. In 2002, Shakeela announced that she will no longer act in B grade movies and released her autobiography in 2018.

Girl Struggled To Attend Online Class Without Smartphone !! Actress Sent Her An iPhone

After seeing a struggling story of a girl student who scored an impressive 94 percent in her pre university college exams in NDTV, actress...