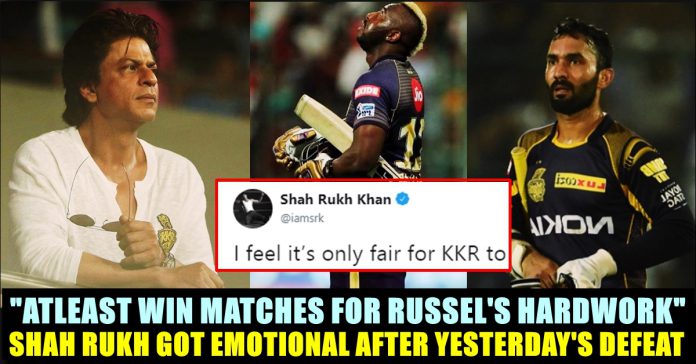 Not often a team would be thrilled to win a game by 10 runs from a situation where the opponent needs 168 runs from 11 overs. The Royal Challengers Bangalore were that team on Friday in Kolkata where they came up against yet another Andre Russell blitz. The Caribbean all-rounder joined hands with Nitish Rana by adding 118 runs in only 8 overs. However, a couple of dot balls at crucial junctures cost the game for the home team.

Kolkata Knight Riders now have lost in each of their previous three matches at the Eden Gardens. They went down to Delhi Capitals and Chennai Super Kings by 7 wickets and 5 wickets respectively in their previous two games here. With the 10-run defeat on Friday, KKR recorded their first instance of losing in three consecutive matches at their home venue in Kolkata. Royal Challengers Bangalore also defeated KKR for the first time in six matches they played since the start of 2017 in the IPL.

when Russell came into bat, 135 runs were needed off 49 balls but the West Indies big-hitter kept them in the hunt right till the last over, smashing nine sixes and two fours in a 25-ball 65. “To lose by 10 runs, it’s just two hits away. In the middle period, if we scored a bit faster we would definitely get the runs with even balls the spare,” a disappointed Russell said at the post-match news conference.

Meanwhile KKR’s owner and Bollywood Superstar came up with a message to his team after the loss against Bangalore. In his twitter handle he said “I feel it’s only fair for KKR to do something in return for @Russell12A ,like winning a few before the season ends.”

I feel it’s only fair for KKR to do something in return for @Russell12A ,like winning a few before the season ends. https://t.co/Lqybf9vK2k His followers also felt the same as well :

Yes…feeling so bad for our Big Man DRE-RUSS! But we have still couple of games left in the leauge lets finish the league stage in style by wining all next remaining games and get qualified for the PLAYOFFS! Wishing good luck for our ZERO film release in China! Love u SRK 😘❤️

Please send Robbie back home, he is making blood boil

Earlier Shah Rukh Khan posted a tweet after the lose of KKR against Delhi as well.

Post Diwali celebrations, Tamil cinema celebrities were busy posting videos and photos captured on the special day of the festival of lights in their...

Insta User Made Fun Of Kavin’s Family !! Here’s How Abhirami Reacted To It !!

Since getting evicted from Bigg Boss house, Abhirami Venkatachalam is very much active on social media platforms, especially on Instagram. She keeps meeting her...