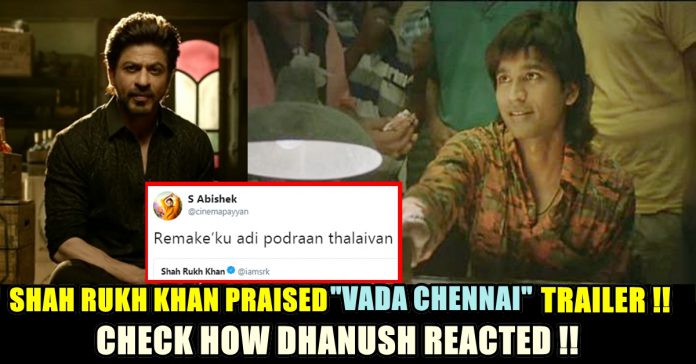 Vada Chennai is easily one of the most-anticipated movies of this year. Directed by Vetrimaaran of Visaaranai fame, the film has Dhanush in the lead role. Vada Chennai will be the third collaboration between the director-actor duo who have earlier worked on Pollathavan and Aadukalam, which got Dhanush six National Awards, including that of Best actor. The extremely humble ‘Raanjhanaa’ actor Dhanush acknowledged SRK’s sweet gesture and replied to him in the sweetest way possible. “How sweet and kind of you sir. Thank you so much. Big big hug. I’m super thrilled you liked the teaser”, Dhanush said.

How sweet and kind of you sir. Thank you so much. Big big hug. I’m super thrilled you liked the teaser. https://t.co/pmwRaymKV2

In an interview, Dhanush revealed that the film is currently on the editing table. Given that Vetrimaaran is very particular about the output, he is taking his own time to finish the work. Earlier, when the teaser of Zero was unveiled, Dhanush lauded both Shah Rukh and director Aanand L Rai. It was Aanand L Rai who introduced Dhanush to the Bollywood audience with the 2013 film Raanjhanaa. After Vada Chennai, Dhanush has many projects in hand, including Maari 2 and a Bollywood venture. Vada Chennai is the story of a north Chennai gangster. It is rumoured that the film will show the rise and fall of Dhanush as a gangster.

Earlier, Vijay Sethupathi was supposed to play a lead role in the film, but due to the delay in the project, he backed out of the project. Director-actor Amir replaced him. Here’s what some of the fans reacted :

Thanks a lot my @iamsrk Anna

sharukhkhan ji so so thnx for spending ur precious time to watch,liked&posting about our @dhanushkraja anna movie #vadachennai teaser , luv u SRK with respect

What do you think on this conversation , let us know !!

Days ago, Chief minister Edappadi K Pazhaniswamy warned DMK's A.Raja to mind his tongue over his comparison between Stalin's slipper and a state's chief...