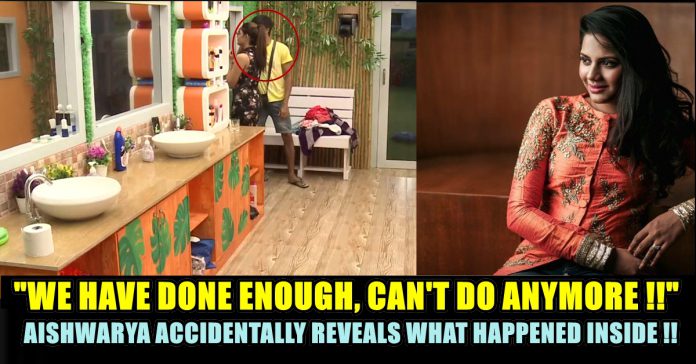 Bigg Boss housemates are currently performing the luxury budget task of the week, for which they are divided into two teams and are asked to save as much water as possible by positioning their hands to cover holes and stop leakage.

The yellow team and red team keep picking on the opposition teams every time they speak in English. This way, each team tries to increase the water level in their tanks. What her teammates do not know is that Mumtaz receives a secret task to undermine her team and bring down the water level. If she succeeds in the task, the housemates will get full points for luxury budget and Mumtaz will also get a special power.

This leads to a heated argument among her teammates Daniel, Mahat and herself. Yet, she succeeds. The red team is in the lead and are just three buckets away from filling their tank completely. Later, Bigg Boss announces the halt of the task for the night with a siren. In between this busy house a controversial video surfaced Internet which involves the rumoured couple Aishwarya and Shaariq. As they come together from smoking room, they see Ramya standing infront of mirror. Aishwarya casually starts a conversation with Ramya where Ramya secretly warns Aishwarya for being alone with Shaariq inside the house. Without knowing that Shaariq rubs her face and pinches her repeatedly to which Aishwarya punches him. While leaving the room Aishwarya casually says “Neraya Panniten , Ithukapram Panna Mudiyathu” which means ” I have done enough for you , cannot do this more” which blatantly denotes what they done inside the room.

Watch the video below carefully :

While they come from the room together rest of the housemates giggles themselves and murmurs seeing the duo. Comment below what do you think on this !!

Previous articleM.S Dhoni : The Untold Story To Resume Its 2nd Part !! Dhoni To Script This Time ?? Awestruck !!
Next articleVignesh Shivan Wants Dhoni To Become The Prime Minister Of India !! “I Don’t Mind The Trolls” For This He Says !!

This Former Female BIGG BOSS Contestant Shared Screenshots Of The Messages She Is Receiving !! Check Out !!

The third season of Bigg Boss show Tamil is surely a hit, thanks to all the controversies. It doubled the number of followers as...

Just as expected, the diya lighting even conducted by our honourable Prime minister Modi, went wrong to an extent that people started bursting crackers...